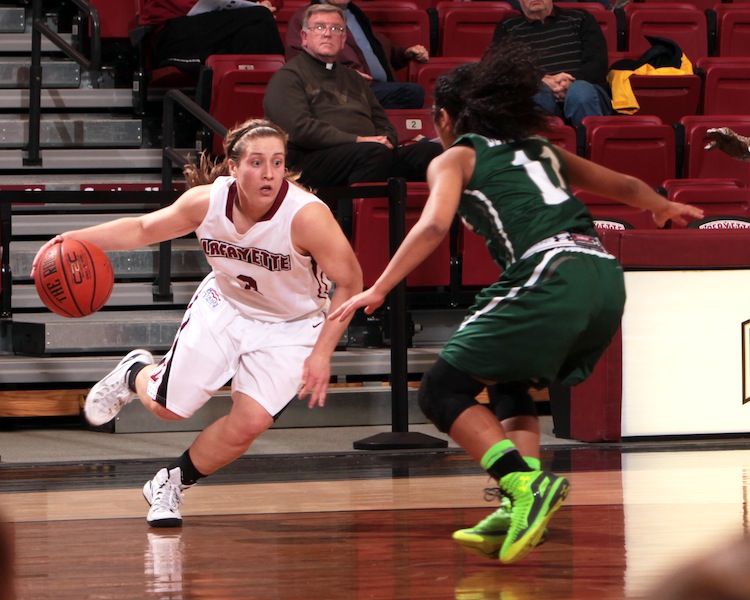 Inconsistency seems to be plaguing both the men and women’s basketball teams in Patriot League play this winter. The men’s team boasts a 14-11 overall record, while just 6-8 in Patriot League contests. Similarly on the women’s side, the team is 12-13 but just 5-9 in league play.

Only three of the men’s losses have come from out of conference games. The Leopards found trouble inside their own league. In the last three outings, the team has gone 0-3 in Patriot League matchups.

“I think the biggest thing for us right now is just consistency in terms of effort and focus,” senior Dan Trist said.

The Leopards were defeated most recently on the road against American by a score of 88-77, trailing by as many as 19 points in just the first 20 minutes of play. The loss came despite junior Bryce Scott’s 24-point performance, including a career-high seven three-pointers.

“This past week has been a pretty down week because we’ve come out in all three games and wouldn’t play as hard as we needed to play in the first ten minutes and we’d have to dig ourselves out of a hole,” Trist said. “That’s not really conducive to a winning formula.”

Prior to the loss at American, the men dropped back-to-back games at Loyola (62-43) and at home against Boston (74-60). After these losses, the team sits at a tie for sixth place in the conference. But with the league race as tight at it is the team sits just one game out of earning a home playoff game (awarded to seeds 1-4).

If the team stays at a tie for sixth with Holy Cross, Loyola and Navy, the team may have to face a play-in game to earn a birth in the Patriot League tournament. The team, however, has shown that they can defeat any team in the league, except for American. They have split the series 1-1 out of the teams that they have faced twice.

With four games remaining in league play, three at home with the fourth at their rivals Lehigh, the Leopards look to regain the consistency they started off the season with, going 8-3 in non-conference games before Patriot League competition began.

“In the Patriot League this year, it’s whoever is more ready to go, and even then it’s decided by two, three, or four points every game,” Trist said. “You’ve got to bring it every night and I think that’s something we’ve struggled with.”

The women’s season has gone in a similar direction, starting out 7-4 prior to the start of league play. The team now sits in a tie for seventh place in the Patriot League. Senior Maddie Peabody explains that Patriot League games are tough, because every team plays each other twice. That gives all of the teams a chance to recognize how teams run their offense and defense.

“Everyone knows the strengths and weaknesses of each team so well that it’s more about who executes their game plan,” Peabody said.

As a result, the coaching staff and players must put in time scouting other teams. Between film sessions and scouting reports, the team must develop a game plan and translate it onto the court. Lafayette is coming off a 74-58 loss to the first place American Eagles.

Prior to American, they beat Loyola at home, but lost prior to Boston on the road. With four games left in the season, the women are trying to muster up enough momentum to avoid a play-in game, like the men.

“Everyone’s definitely beatable in the league,” Peabody said. “We’ve had some not so great results, but we’ve played well at stretches. I don’t think there’s any team that can’t be beaten, and anyone can beat you on any given night. I think that will make for a pretty exciting Patriot League Tournament.”

The Patriot League tournament will begin for the men on Mar. 3 and on Mar. 4 for the women. Until then, both teams have four games to secure their seeds going into the postseason. Although the future remains uncertain, it is sure that they both are looking for a consistent stretch of play to avoid a play-in-game.