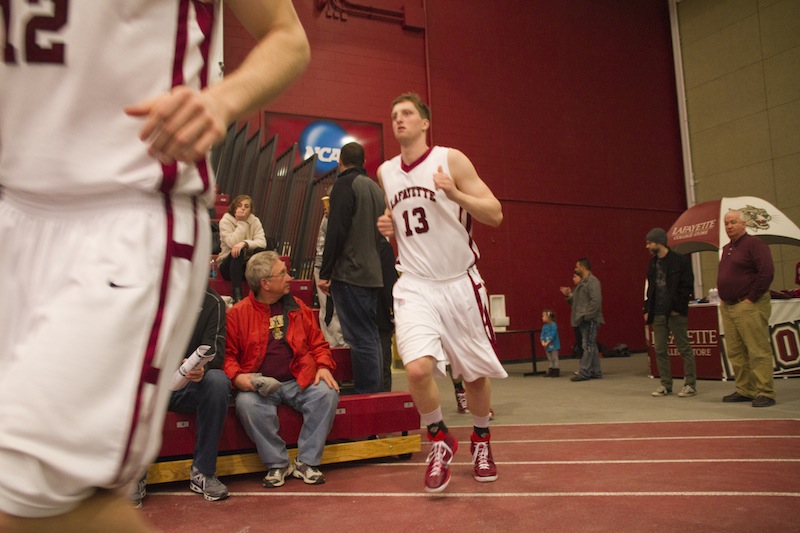 Matt Klinewski runs out of the locker room to the men’s basketball team.

While he does not appear in the top five in points per game or rebounds per game for the Leopards, freshman Matt Klinewski of the men’s basketball team provides something that cannot be seen on the stat sheet—hustle.

There has not been a player on the men’s basketball team this year that has provided more energy off the bench than Klinewski. Coaches of past and present preach about the six-foot-eight-forward’s high motor; with this Klinewski has found his niche on the basketball court.

“I know I have to give it my all every time I step onto the floor,” Klinewski said.

Giving it his all is something he certainly does, evidenced by the broken nose he obtained diving on the floor for a loose ball against Boston University earlier in the season.

Even though he plays with a ton of heart, his stats do not necessarily match his effort: Klinewski averages 3.8 points per game and 2.1 rebounds per game in 10.7 minutes per game. These aren’t eye-popping numbers, but they aren’t bad for a first year player coming off the bench.

Numbers aside, he likes to view his first year as a learning experience.

“I think I’ve learned a lot from this year,” Klinewski said. “It’s not over yet, but I am going to keep getting better and learn from my mistakes this year.”

Klinewski is the type of person that will work on his game to the fullest. He has, and always will, have an immense love for the game.

“I just love the game of basketball,” he said. “I am a really big fan of the game.”

Two people that have aided in his growth this season are fellow forwards, seniors Seth Hinrichs and Dan Trist. The two have become a mentoring presence for Klinewski on the court.

“I’ve learned many things from those two,” Klinewski said. “They have taken me under their wing and have shown me how much work it takes to be successful in the Patriot League.”

Klinewski eventually hopes to grow into the player he was in high school. He was named The Philadelphia Inquirer’s player of the year for South Jersey, after averaging 24.6 points per game and 10.7 boards per game, during his senior season at Eastern Regional High School.

One person that can get Klinewski’s production back to that form is head coach Fran O’Hanlon.

“Coach O is a great coach…he has been here for 20 years so he knows what he’s talking about,” Klinewski said. “I’m just learning every step of the way.”

Although it seems that Klinewski hasn’t made much of a contribution on the stat sheet, one can definitely expect that to change next year. With Trist and Hinrichs, as well as seniors Joey Ptasinski and Alan Flannigan set to graduate this year, Klinewski will see a severe increase in his minutes next season.

One could fully expect that his strong heart and hustle will finally pay off, with Klinewski becoming a key contributor to the basketball team in the fall of 2015.