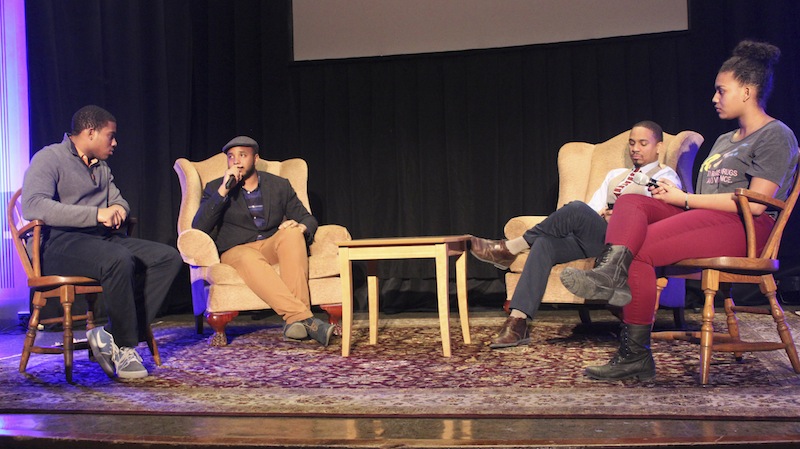 Justin Simien (second from left) at the Q&A following the screening of “Dear White People.”

The film, which follows four black students at a predominantly white university, aims to engage audiences in a mature discussion about race and identity on college campuses in the modern age through sharp satire and meaningful reflection on what it means to be black in the world today.

Dean of Intercultural Development John McKnight hopes that the film will strike a chord with the Lafayette community.

“I think it fits quite nicely given that the focus of the film is on modern day experiences of a diverse group of black students enrolled in an elite, predominantly white university,” McKnight said

“I thought the themes of the film would be incredibly relevant to the Lafayette community,” he added, “And wanted a way of sparking dialogue about racial identity development in the modern era.”

“I think the film sends a healthy message to everyone that we shouldn’t flatten black people into a single narrative,” McKnight said, “particularly when there is as much diversity within this group as there is in any other. I’m not so sure that there is such a thing anymore as ‘the black experience.’”

One of the most significant themes of the film is what it really means to be “black. One character in particular struggles with his racial identity, with his love of “Star Trek” and his homosexuality put him in a position of not being “black enough” for some of the more racially minded black students on campus. The specter of racial expectation hangs over all of the characters throughout the film, whether they embrace it or try to defy it.

“I think it is an important film because…Lafayette is a very similar environment to the college [in the film],” Ellen Galleria ‘15 said. “The film addresses casual, covert racism…I see a lot of well meaning well intentioned people who don’t really know what they are talking about…I think it will start a conversation in a funny, not attacking way.”

Most of the racism in the film comes from well-meaning individuals who do not consider what they do racist, even when they are participating in a “blackface” party. Unless the audience believe that such parties are phenomena of the 19th century, the film concludes with a montage of real racist-themed college parties across the country, some as recent as 2012, demonstrating the tragic honesty at the heart of “Dear White People.”

After the screening, Justin Simien held a brief Q&A session where he spoke about his experiences with race and his intentions for his film.

“There are all these expectations I have to go through because of my race,” Simien said. “[People should] talk about [race] not fight about it…you have to not be afraid to talk about it, and that’s not easy.”

Speaking about the film itself, Simien described it as “a very challenging movie” and he has faced some backlash over the film. But, he said, “[the backlash has] confirmed that this is the movie I wanted to make.”

“I think people have to get out of their mind that racism is bigotry,” he said. “Racism is an institution where people of color are disadvantaged…we need to wake up.”