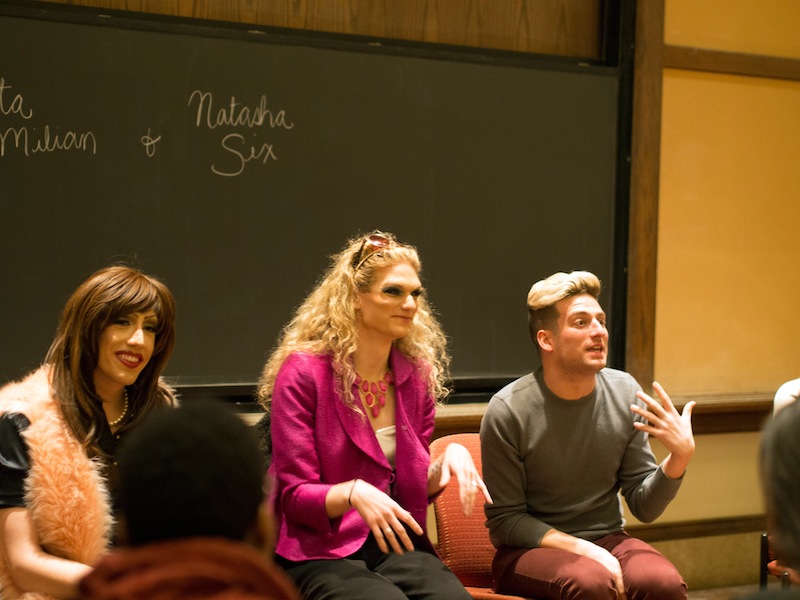 Drag performers encourage their audience to not care what others think

As Lafayette continues on this year’s sex week, drag performers were invited to visit Lafayette College and to perform in Colton Chapel on the night of Tuesday February 17.

The performance was hosted by Jared Picone and starred the drag performers Magenta Milian and Natasha Sixxx. Jared started off the show by asking the audience to raise their hands if they have ever been to a drag show or seen a drag queen in person. He then teased a few people and told some jokes about them before he gave a brief introduction about the performers.

After the brief introduction, Magenta Milian and Natasha Sixxx lip-synced and danced along to various songs, starting off with a duo performance to Fancy by Iggy Azalea and then solo performances to songs like Blank Space by Taylor Swift and Just Dance by Lady Gaga. The performers engaged the audience by going off the stage to dance between the pews with the audience members and pulling some audience members up onto stage—even handing out their autograph.

Between performances, when Magenta and Natasha got ready for their next act, Jared kept the audience entertained by singing Glitter in the Air by P!nk and Love Song by Sarah Bareilles. He also told stories and did some stand-up comedy on topics such as how our “dining hall’s great food but [we have] crappy bathrooms.”

Before the last act of the show, one in which Jared and Magenta Milian both sang a duet, Jared tells everyone that they should let loose and just “go home and laugh about it” after this “celebration of diversity.” He reminds people that even though life can be tough sometimes, not caring what others think and just having fun and being yourself is the best way to get through those tough times.