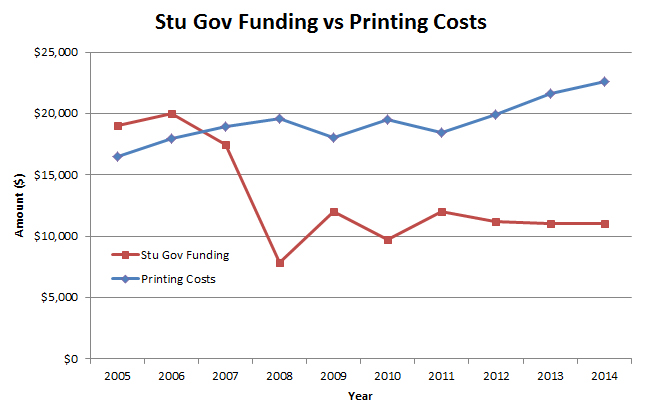 For the last seven years, student government has funded only a fraction of our core operating expenses. This year, for example, student government allocated us $11,000 while our barebones budget is $33,213. The majority of our costs have been withdrawn from a separate special account, what was referred to as the reserve account in the editorial, “A call for support.”

This special account will be depleted by the end of the semester.

Since 2007, this special account has paid the difference between our operating costs and what student government funds us. At this point, the complete history of this special account is unknown. We are still in the process of contacting alumni and former college officials in order to learn more.

Funding over the years

The graph below illustrates the printing costs of The Lafayette against student government’s funding.

A clear understanding of our four bank accounts:

Restricted account — Most on-campus clubs have restricted accounts, according to Office Assistant Kelly Deemer. Any money raised by the club members should be deposited into these accounts. Unlike student government accounts, money in this account rolls over to the next year. Our revenue from ads, subscriptions and donations should be deposited into this account. But, since the decrease of funding from student government, all of our revenue has gone towards making up the difference between student government funding and our total costs, Deemer said.

These are all the facts to understand what The Lafayette requires to print until the end of the semester and in the future:

The total estimated operating cost for next year is $33,213. Our largest expense is printing which accounts for $22,554. The remaining costs are our adviser’s salary, press membership fees, subscriptions postage, the annual Associated Collegiate Press convention, campus distribution and office supplies. The complete breakdown of our expenses is included below.

Student government allocated $11,000 to The Lafayette last year, or about one third (33.1 percent) of our total operating costs. We can no longer rely on the special account to cover the other two-thirds of our expenses. It will be depleted before the end of this semester.

It was a surprise to us to discover that this special account was almost depleted. Admittedly, past club members could have kept track of The Lafayette’s records more effectively. But former Editor in Chief Mick Kowaleski ‘14 said he met with college staff in the spring of 2014 when he was concerned for the paper’s financial future and walked away under the impression that The Lafayette would be fine for the next two to three years.

Below is a breakdown of our core costs for the rest of this semester.

We will continue to print through the end of the semester

We are committed to printing until the end of the semester. If necessary, we will do so by using and nearly depleting our restricted account and endowment account. We are reluctant to use these accounts, because we do not feel reassured we will receive sufficient funding in the future.

As soon as we discovered that our special account was nearly empty, we took several measures to cut costs. We cancelled our cable bill. We stopped sending trustee subscriptions free of charge. We did not attend the annual Associated Collegiate Press conference. We also saved $2,200 by cancelling our subscription to Camayak, an editing program.

At student government’s suggestion, we looked into reducing the quantity of newspapers we print each week. The savings would be insignificant. For example, decreasing our current 1,400 copies to 1,000 would save us about $28 per issue.

After the discovery of the special account, these meals continued to be approved by Office Assistant Kelly Deemer. Deemer would check to see if the staff had spent less than $15 per person and then reimburse the cost.

Once we became aware that our financial situation was no longer secure, we stopped having staff dinners and pizza.

In addition to cutting costs, we took steps to increase our revenue. We raised the price for subscriptions to The Lafayette. We are working with ITS to use Google AdSense to advertise online.

Admittedly, our print ad revenue has decreased over the last few years. Last semester we sold about $1,000 of ads. This ad manager has since quit. We hired three new ad managers and are paying them commission as incentive. These new ad managers worked with an economics professor to redesign our ad pricing scheme and think of new clients to target. Like any staff change, this transition has taken time.

Our request to student government

We provided student government with a detailed budget and submitted a formal request for $5,172. This amount represented the $ 7,172 we need in order to continue operating through the end of the semester, minus an expected $2,000 of ad revenue. During our discussions with student government, some members questioned the value of the newspaper.

Student government did not directly allocate us the funds we requested. Instead, they voted to match the revenue we make in ad sales this semester up to the amount requested. In other words, we must sell $3,586 in ads this semester if we want to cover our expenses.

For reference, we estimate that in the past we made about $2,000 to $3,000 per semester from advertising. This means we made less than $3,586 per semester. Due to the staff changes and a fluctuating ad market, there is no certainty we will reach the amount student government required of us by the end of this semester.

Student government wrote in an email that they made the decision to match our revenue, because they felt the need to address the “poor decisions” of previous staff members and provide “an educational experience for club officers.” In recent history, all of The Lafayette’s expenses were reasonable and approved in advance by the administration.

Last semester was particularly difficult. Most of our staff graduated and others left. This semester, we started off with a young staff. We work an average of 10 to 20 hours a week to produce the newspaper, depending on one’s staff position. No staff members receive any monetary compensation or academic credit for their hard work.

Student government sent us an email last Wednesday night notifying us of their decision. In the email, they wrote, “Student government is assured this action will permit budget committee to allocate your basic annual budget come budget week in a similarly fair and equitable manner.”

We believe it is unrealistic to expect we will be able to raise half of our operating costs. Student government’s decision appears to establish a precedent that they will not cover our core expenses. Because ad revenue inevitably fluctuates, under this system we cannot ensure we will always have sufficient funds to operate.

We need a stable source of funding

The Lafayette is the oldest college newspaper in Pennsylvania. It has been printing for roughly 145 years. We are looking to ensure The Lafayette has a dedicated, stable source of funding so that it will be able to print for the next 145 years to come.

Have you considered starting a gofundme.com page? I’m sure current students, staff, and alumni would contribute if one was developed

Instead of continuing to waste money on producing a newspaper nobody reads, why don’t you increase your efforts to expand this website and perhaps run articles continuously throughout the week instead of just when the newspaper is produced? Clearly, newspapers are a thing of the past and students would much rather look at news information through an app or online. Get with the times!

Have you ever considered switching the paper to a biweekly or monthly format? It would cut printing costs in half (or more), and the quality of the paper would improve with editors not pressured to rush out junk every week. You guys could take more time to put out better (and maybe even bigger) issues.