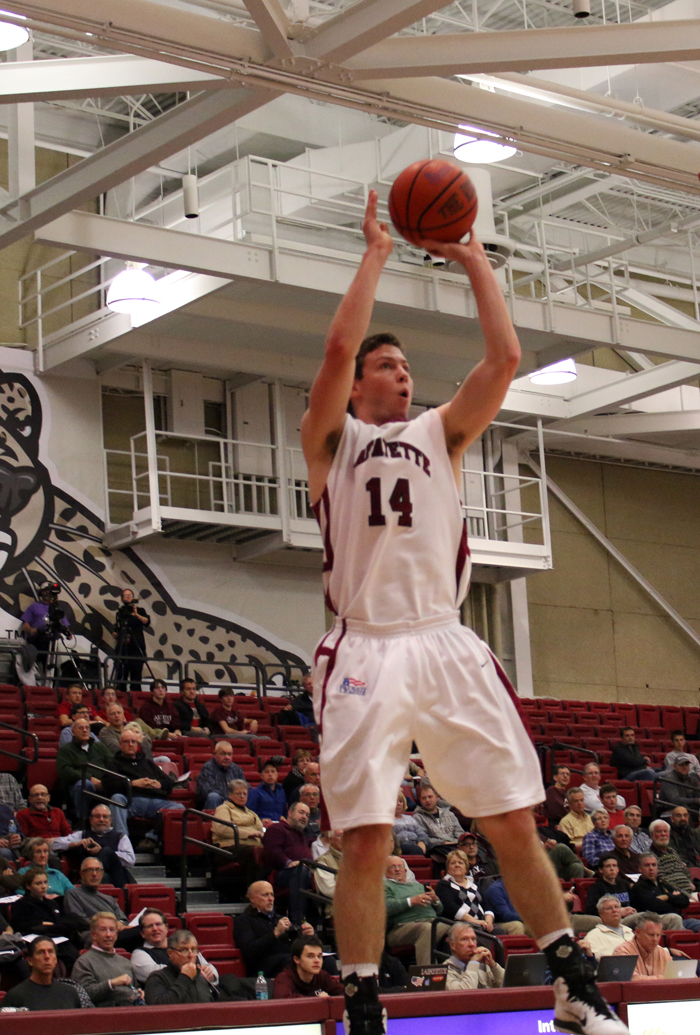 Adam Nussbaum: Take me through a typical in-season day.

Bryce Scott: I wake up and go to class from 9-12, eat lunch, and then do some homework. In the afternoon the team watches film at four, practices from 4:30-6:30, and “scout” afterwards, where we go through other team’s plays and strategy. We also incorporate float-lifts into our schedule three times a week.

BS: I ran cross-country and played soccer until high school, and also baseball until my sophomore year of high school.

AN: When did you start playing basketball and how did you know it was right for you?

BS: As long as I could remember. Honestly, I can’t even remember my first shot but my dad is a coach and got me into it as soon as he could. Once I started playing I fell in love with the sport and haven’t stopped.

AN: Who has been the most influential figure throughout your basketball career?

BS: My dad. He played professionally in Germany and coached me throughout middle school and high school. He taught me everything I know and is the reason I’ve developed into the player I am today.

BS: I wanted to go to a school with a good balance of academics and basketball. My final three choices were Princeton, Lafayette, and Boston University. I committed to Lafayette on the day of my visit, because it had a good team and positive atmosphere.

AN: How has the team improved over the course of the season?

BS: We’ve had a lot of ups and downs throughout the season and we’ve learned how to cope with losses. Everyone has done a good job of keeping a positive mindset and rallying rather than folding.

AN: Have you made any changes to your workout regimen over the course of the season?

BS: Practices aren’t as heavy during the season and we get special treatment after games, whether it’s ice, stretching, or whatever you need. Off-season workouts tend to be more individually focused so people can improve their specific games.

AN: What is the team doing to prepare for the upcoming Patriot League Tournament?

BS: We’re still trying to hit our stride. We haven’t played our best in a long time and we know we can be better so we want to find a good rhythm coming down the final stretch of the season.

BS: Dan Trist has had an amazing season, Zach Rufer has made a huge impact coming off of the bench, and Nick Lindner has done a great job of running the point.

BS: My real name is Stephen, not Bryce, and I was born in Germany.