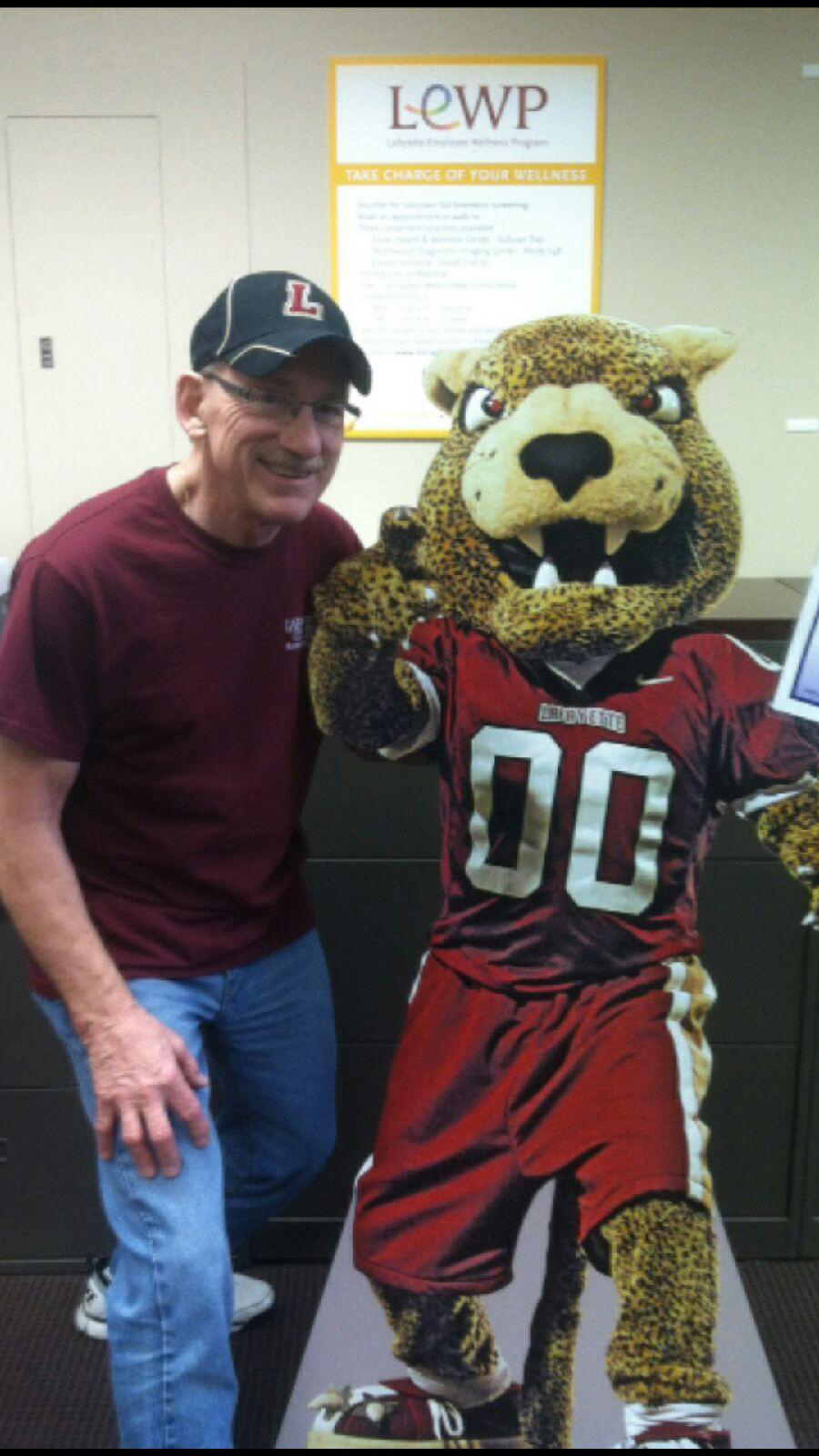 Rick Fisher meets with a cuttout of himself as the Leopard.

After eight years of remaining anonymous, the beloved Lafayette mascot finally unmasked himself. During his time on the job, the man behind the mask took the role to the next level, making the role grow from being a cub at the games to a true Leopard.

In the fall of 2006, Rick Fisher, now a custodian in the Bourger Varsity Football house, attended the annual Lafayette Block Party. He saw the old Leopard mascot there and felt the mascot should be moving around more to entertain the crowd.

Not long after the clock party, Fisher went to the athletics office to find out how he could be the man in the suit. He came in with a different vision for the Lafayette Leopard.

After being given the job, Fisher, now 65-years-old, set out to take the role to the next level. No longer would the mascot be just a presence. Fisher set out to make the Leopard mascot more recognizable than it had ever been. He made it a point to climb around the stands, give high-fives to fans and take pictures with them. He also valued his interaction with children. Anyone who has ever attended a Lafayette sporting event can attest to his ability to engage with fans. He learned how to entertain a crowd, he said, because of experience as a rodeo clown.

“Whenever you’re in front of people, someone is always watching you,” Fisher said. “So I made sure to be always moving around.”

Fisher even reinvented the costume, so that the Leopard could wear different shorts. He didn’t see why the Leopard would wear basketball shorts to a football game. With help from his mother-in-law, he was able to make football pants and different colored shorts for the Leopard to wear, tail-hole and all. He and his wife maintained and cleaned the suit also.

The Leopard attends over 50 events per year and Fisher only missed about three events in his eight-year tenure. He felt it was important to always be the man in the suit. Some schools have multiple people perform as their mascots and he always thought he could tell the difference between their styles.

Because he was the sole wearer of the Leopard suit for eight years, he said he was able to form relationships with certain people that constantly attended games. Fisher hated the thought of someone that he often acknowledged to be ignored at an event, because he was someone else than in the costume.

Outside of his attendance at events, the 65 year-old had to train to stay in shape. The job involved running around, carrying a 15-pound flag against the wind and climbing through bleachers. He did stadium steps and other workouts so he could best perform for fans.

But at the end of the 2014 football season, he suffered a broken foot at his job as a custodian. With further complications, he decided that after eight years, it was time to hand in the Leopard suit. This was an emotional decision for him and his family.

“It was a part of my life, but all good things come to an end,” Fisher said.

Before his career ended, however, he was able to attend the 150th Lafayette-Lehigh Rivalry game in New York City. It was an experience he will never forget. Besides performing in front of nearly 50,000 fans at Yankee stadium, Fisher partook in the closing of the New York stock exchange, ran out of the Yankees bullpen to the roaring of fans and received the winning trophy from the Lafayette-Lehigh Giving Challenge, before presenting it to President Byerly. Complete with a victory, it was Fisher’s favorite game.

From fans, to administrators, and those in the Athletic Department, Fisher said people always had nice things to say to him. He’s grateful for all of the support they have offered over the years.

But Fisher will not be gone for good. Once his foot heals, he will return to work at Bourger, and will be in attendance at all of the football games. Except next time, fans will be seeing the man behind the Leopard.