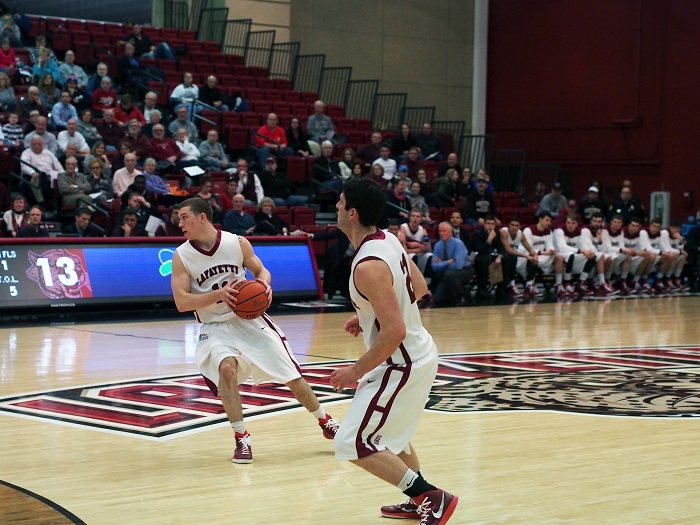 A win Wednesday night makes it three straight for the Leopards

The men’s basketball team has climbed the Patriot League standings in the past week and a half to pull into a tie for third place with American and Lehigh. Most recently, the team came back from a second half 17-point deficit to defeat Bucknell. Before then, the Maroon and White won back-to-back road games at Colgate and Navy.

A big part of the team’s comeback was due to the fact that the team only turned the ball over once in the second half. Both senior Dan Trist and sophomore Nick Linder led the effort.  Linder finished the game with a career high 26 points, while Trist added 29 more to the team’s total.  The rally was sparked by a three-pointer from sophomore Zach Rufer. Then, three straight mid-range jump shots taken by Trist at the top of the key made it a three-point game. The Leopards never looked back, sending the game into overtime and ultimately defeating the Bisons by 10 points.

Down the stretch, Linder scored ten of the team’s final 13 points. Linder also hit the go-ahead layup with 13 seconds left to add another five minutes to the clock at the end of regulation.  Bucknell was unable to defend pick-and-roll play at the top of the key with Trist and Linder.

“It’s 95 percent Nick,” said Trist. “He comes off of ball screens so quick and goes so deep [into the lane], and then when players try to block his shot, Nick pitches it back [to me] and I’m pretty confident with that shot. It’s easy when you got a guy like Nick who can get into the lane.”

Linder added that their chemistry comes as a result of the opposing defense guarding the other offensive players.

“They were playing our shooter really tight, like Joey, Seth and Bryce,” Linder said. “That leaves opportunities and space for Dan and I to run the pick and roll.”

Prior to the Leopards win against Bucknell, the team had won road games against Colgate and Navy. Linder also hit the go-ahead shot against Colgate with 13.3 seconds left, ensuing a victory for the Leopards. Leading the team against the Red Raiders and Midshipmen was Trist, scoring 24 and 23 points, respectively.

Like in the second half against Bucknell and against Navy, Lafayette’s defense showed improvement.

“I think our defense has gotten a lot better,” Trist said. “I think that teams kind of figured out our defensive weaknesses in the Patriot League. We weren’t very good defending the lane – we let teams get in there pretty easily.”

As the defense as been improving the last few games, the offense has been relatively consistent and efficient all year. Trist cites that this may be due to the fact that the team goes with a smaller starting lineup than most teams.

“Some teams play two big guys,” Trist said. “It gives them a different look on the defensive side. They have at least one big guy who’s going to have to look after a smaller and shiftier guy, which is quite tough.”

The threat is easy to see, given the outstanding shooting percentages that the team’s forwards and guards have posted.  Senior forward Seth Hinricks is shooting 47 percent from the field and senior guard Joey Ptasinski is shooting 57 percent from short range and 50 percent from behind the three-point line.

The Leopards will look to continuing rolling against the Boston Terriers Monday night.