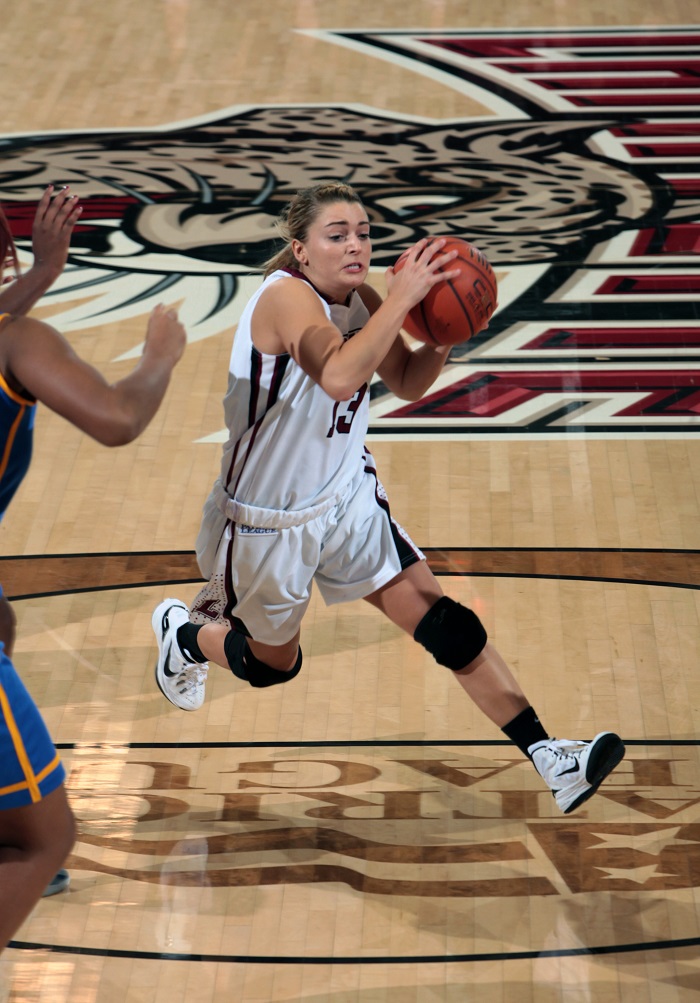 O’Hare leads the surge against the Red Raiders

Apart from making the game-winning basket, O’Hare’s video has gone viral.  The video of her inbounding the ball off of the Colgate defender’s back and scoring on a reverse layup has been seen on various websites, including Yahoo Sports and Sports Illustrated. The link has even been shared on Facebook by rapper Lil’ Wayne.

Believe it or not, what O’Hare did was contradictory to what her coach called. Head coach Dianne Nolancalled an entirely different play for that specific inbounds pass. O’Hare wasn’t even supposed to be handling the ball.

“I learned to do that play at a very young age and I couldn’t help myself because the set up couldn’t have been more perfect,” said O’Hare.“I wasn’t nervous for some reason…it all happened so fast and I didn’t even give myself a chance to really think about it.”

All of the players from both teams were lined up away from the baseline and basket, exposing the left side of the court. The defender guarding O’Hare had her back turned and couldn’t see O’Hare at all. So, O’Hare saw the opportunity and executed the play.  The rest of the team had no idea what she was about to do.

“I usually don’t take the ball out of bounds either, but I happened to take it out for some reason on that play,” said O’Hare.“I didn’t even know I was going to do that until I saw the Colgate girl’s complete backside facing me.”

Besides all of the positive attention that the video has attracted, various social media sites have posted O’Hare’s video criticizing the play.  Many have claimed that O’Hare’s foot was out of bounds when she took the layup.But O’Hare seems indifferent to the negativity.

“I honestly don’t care at all,” said O’Hare.“It’s actually just really funny to read and see how interested and invested these people get over the video. It’s also hard to keep up with the mass amounts of comments, so I don’t see all the negativity anyways. It’s great to see how supportive and excited my family and friends are though!”

Ever since the Colgate game, there has been an influx of support for the Lady Leopards. O’Hare thinks her play could possibly increase the fan base for the team’s games, especially given attendance at last Saturday’s home contest against Navy. Fans were encouraged by how the team was able to fight back against Colgate, even after being down by so much and having won on a crazy shot. Because of the halftime deficit, many fans left the game.

Even though O’Hare has enjoyed the attention, she still values one thing above all.

“Us winning more and performing better is how we are going to get more fans at the games,” said O’Hare.