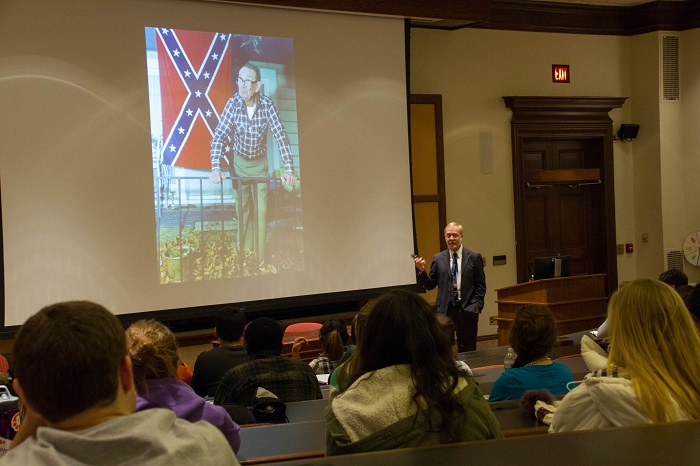 Jerry Mitchell speaks about reexamining cases from the Civil Rights Era as a reporter.

Mitchell’s lecture to students, titled“Chasing the Real Ghosts of Mississippi,” highlighted the most compelling cases he investigated throughout his career that resulted in the incarceration of Ku Klux Klan members involved with killings.

Mitchell was portrayed in the 1996 film “Ghosts of Mississippi”due to his work in reopening the murder case of Medgar Evers, a black civil rights activist, who was murdered in 1963.

As a white reporter concerned with civil rights, Mitchell was an “intentional choice of speaker,”according to Dean of Intercultural Development John McKnight.

“I think it is problematic to think of Black History month as only applying to black people, ” McKnight said. “I wanted students of all background to see this man, who is an agent of change, from a standpoint that reflects humanity as a whole.”

Mitchell reiterated the importance of providing justice to those lives lost whether it is one day or 60 years following a crime.

“We are experiencing a devaluation of life if we do not seek justice for these victims,” Mitchell said.

For Torera Fagbenle‘17, Mitchell’s lecture touched close to the heart.

“I try to remember in my daily life to really see and love humans as humans,”Fagbenle said. “It’s about humanity and not color.”

One of the most gratifying experiences Mitchell witnessed during his career was the apology offered to Ellie Dahmer, the widow of Vernon Dahmer, by Klan member Billy Roy Pitts.

Vernon Dahmer was a former president of the National Association for the Advancement of Colored People (NAACP) who died after Klan members firebombed his home on Jan. 10, 1966.

The case had long grown cold, but Jerry Mitchell decided to contact former Klan members to unearth new evidence that could possibly re-open the case.

As a result of Mitchell’s investigation, Billy Roy Pitts pled guilty to arson and murder in Vernon Dahmer’s murder. Pitts then testified against the mastermind of the Dahmer home firebombing, Samuel Bowers. Bowers was convicted and sentenced to prison in 1998 after he had preciously walked free from the court 30 years earlier for trial for the Dahmer murder.

The apology Pitts offered to Ellie Dahmer was a great measure of satisfaction for Mitchell.

The conclusion of Mitchell’s lecture emphasized the importance of being fearless enough to pursue the justice that places the same value on all human life.

“Living fearlessly is not about living without fear; it’s about living for something bigger than yourself,”Mitchell said.