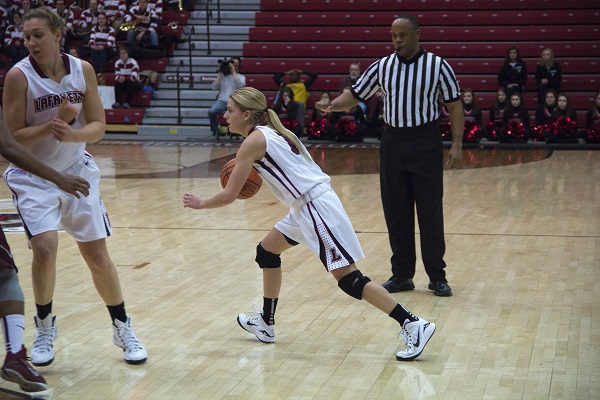 An abundance of talent is not a luxury enjoyed by most Patriot Leagues teams, but at Lafayette it’s the status quo.

Senior captain Emily Homan is currently one of the bestcenters in the Patriot League. Homan is averaging 17.7 points per game to go along with 7.2 rebounds per game. This season, she has been opposing teams’ main focus on defense.  With most of the defensive attention focused towards Homan, other Leopards have been able to shine. Junior guard Jamie O’Hare and freshman sharp shooter Anna Ptasinski have helped to stretch the defense away from her. Ptasinski started coming off of the bench, but is now in the starting line up.

“The freshmen have made an impact on the team,” Coach Diane Nolan said.  “When you go through that first half of league play, you see how they really can play and see what we can take advantage of in the games coming up.”

As a skilled three-point shooter, Ptasinski is a key weapon for the Leopards. Senior point guard Maddie Peabody has also played well as of late.Peabody is fourth in the Patriot League is assists per game, averaging 3.6. Despite individual achievements, the Lafayette women’s basketball team is not afraid to share the ball.

“When we move the ball and play up to our potential we can do amazing things,” Ptasinskisaid.“We have lost a few games that we could have won. Sometimes we start hesitating and second guessing ourselves, but overall we have moments of greatness that show how talented we are.”

“We do a good job of moving the ball we just need to execute offensively and make sure we play at our own pace,” Lutzsaid. “Sometimes we let other teams rile us up.”

At the half waypoint of the season, the Leopards need to understand their strengths and weaknesses as a team. They’ve got some work to do, but now they know the competition inside and out.

“I think during the beginning half of conference play you start to figure out everybody’s role,” Nolansaid.

The Leopards are half way through their Patriot League season. The team is currently 4-5 in conference play, and 11-9 overall, losing just 2 games at home.The great thing about Patriot League basketball is that even the lowest seeded team still makes the playoffs. Although they have never hosted a playoff game, it is a goal that is still very much alive. The Leopards could turn it all around with the second half of the season.

“We know that no game is an easy game and we have to bring our best, every possession of every game,” said Ptasinski.