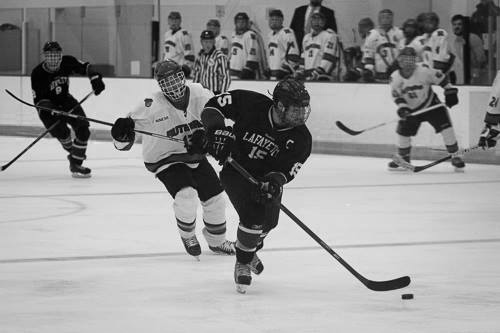 Senior Captain Kyle Brennan races down the ice on a breakaway.

After winning six of the last seven games, the Lafayette Ice Hockey team passed the double-digit victory mark for the first time in the last five years. Sitting at 10-6-1, the Leopards look to translate this success into playoff wins.

In the past two years, the team ended the season with just nine wins. Already past this mark, the players are ready to make a statement to the conference. They are currently in a position to earn the third playoff spot.On the weekend of February 13th, they will look to earn a playoff victory, something that has eluded the program in recent history.

Since the break, the Leopards are 2-0. This past weekend, they defeated Long Island University 7-3 and Susquehanna University by a score of 6-3.These victories came despite losing key player sophomore Graham Thomas, who is currently studying abroad.  Stepping up for team has been sophomore Matt Goldsworthy. He made the transition from defense to wing.  Goldsworthy has had two goals in the past two games since making the change. Also stepping up is freshman Parker Gaglione. The first year front-liner’s performance has already made quite an impact.

“He has been doing a good job sharing the puck and giving to Kyle [Brennan] and Sam [Komrower],” sophomore Matt Goldsworthysaid. “He’s had to make an adjustment from the second line to the first and he’s already had two goals in two games.”

With Thomas as an exception, the program has been successful in maintaining a full team this year. In recent years, a combination of injuries plaguing the roster and losing players to studying abroad ventures depleted the pool of players. This year’s team, however, of 17 players has been standing strong.

Senior captain Kyle Brennan led the Leopards. His 19 goals and 24 assists total to 43 points, which puts him among the best in Division II club ice hockey. According to his teammates, he has been essential in creating and developing the program. This year, he mentors a strong pack of six freshmen, including Gaglione.

Prior to the break, the Leopards lost an overtime game to Lehigh in which they came from behind to force an overtime period. Lehigh is a strong Division I team and being able to compete with them strengthened the morale of the squad.

“Even though it was a loss, that game actually did a lot for us,” Goldsworthysaid. “It was our last game before winter break and since then, we’ve won our last two games.”