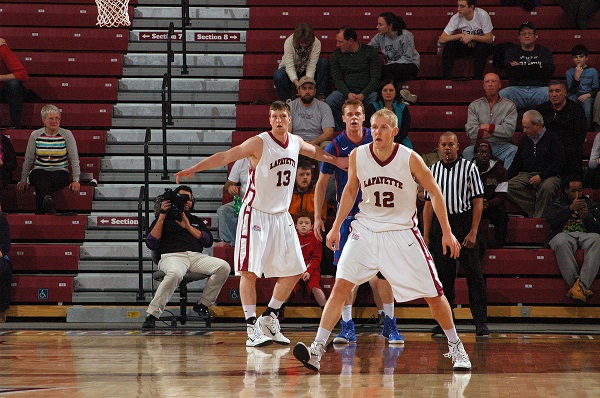 Teammates Seth Hinrichs and Matt Klinewski get back on defense against the American Eagles.

Reaching the halfway point in conference play Wednesday night against Colgate snapped the Leopards’ three game losing streak.  The month of January has been up and down for the team and left the Leopards in a four-way tie for fifth place in the Patriot League.  The team wrapped up out of conference play in late December with a record of 8-3.

Just before Christmas, the team traveled to Lawrence, Kansas to face the tenth ranked Kansas Jayhawks.  The final score did not justify the Leopards effort.  With just 11 minutes and 43 seconds left in the game, the Leopards were losing by just seven points to one of the most dominant college basketball programs in the country. Despite losing 96-69 the game was a learning experience for the men’s team.

“It was a tremendous atmosphere to play in and against that caliber of an opponent,” head coach Fran O’Hanlon said. “We competed and played our butts off.  I think we acquitted ourselves well and hopefully it helped us. But really the experience of playing in that kind of environment and playing one of the top programs ever make for memories that will last forever.”

Since then, the Leopards capped off league play with a win against NJIT, but have caught multiple tough breaks in league play.

“Every game in the Patriot League has been really close and every team in the patriot league is pretty even,” said junior shooting guard Bryce Scott.“A lot of them have come down to the wire and we’ve won some and we’ve lost some.  Just the ability to win close games in the Patriot League has been the deciding factor for who’s first and who’s last.  We haven’t been doing too good of a job lately in those close games.”

Close losses to Lehigh, Holy Cross and American in recent weeks have come by a total of seven points.  There last game against Colgate on Wednesday even came by just four points.  Sophomore guard Monty Boykins cited the team’s defensive struggles as the primary reason for a recent lack of success.

“Closing out those last few possessions so we can run out some more clock or just getting a stop in general or making the other team take a tough shot…we just haven’t done a good job doing those things,” Boykinssaid.

Boykins, a 6’5” shooter from Ohio, has earned a more involved role in the team this year and can share plenty of wisdom on what needs to improve.

“We can all score and are probably guaranteed to put up 75 points per game, so really we’ve just got to focus on the defensive end [of the ball] and keep that mindset from the beginning to the end,” Boykinssaid.  “We just to put forth a little more energy where it needs to be.”

Coach O’Hanlon adds that their recent misfortune cannot be pinned on just one aspect of play.  Against Holy Cross, the team was ahead by six points with minutes to go, but their offense went stagnant, allowing the Crusaders to come back and win by one point.  Like Boykins, O’Hanlon also agrees that the team needs to improve on defense and improve their rebounding.

Boykins cited junior guard Zach Rufer as a player who sets the standard on defensive that everyone aims to achieve.

“Zach Rufer is probably the defensive role model for us,” Boykinssaid.“He does a great job of disrupting the other team’s offense and getting his hands on loose balls and steals when he needs them. If we all stepped up in that way we’d have a few more wins under our belt.”

Coach O’Hanlon sides with Boykins, that Rufer has been the unsung hero of the season thus far.

“He’s an energy guy that comes off the bench and he gives us a spark every time he goes in,” said O’Hanlon.  “He does the things that people don’t always see…he gets his hands on the ball and leads us in deflections.  He creates a lot of havoc on defense.  He’s not one of our so-called stars, but you know what you’re going to get when you put Zach in the game. You know you’re going to get disruption.”

The rest of the Lafayette roster is well balanced, with three players averaging over ten points per game, including seniors Dan Trist (17.2), Seth Hinrichs (14.6), and Joey Ptasinski (10.6).  Trist, Hinrichs and Ptasinski also rank in the top fifteen in the Patriot League in field goal percentage.  Perhaps the best part about this Lafayette team is its offensive efficiency.  Lafayette ranks 28th in the country in team field goal percentage and sixth in team three point shooting percentage.

Despite the team’s offensive efficiency, the team has reached their season average of 75.5 points per game just once in the last eight games. Coach O’Hanlon cites both the team’s inconsistency and level of competition as the answer.

“When you get in conference there is more focus on how to beat teams,” O’Hanlonsaid. “Once you get in the league, other teams get to know the coaches and players.  Other teams sometimes have a good plan against us and we have to make adjustments to offset that plan.  In a sense, they’ve found a blueprint for how to play the Leopards and we have to figure out ways to offset that. That’s why I tell the players the league is so much different from out of league.”

As the competition intensifies with the playoffs approaching in early March, the team will look to build on their four-point win against second place [Patriot League] Colgate.

“I think that these guys are resilient,” O’Hanlonsaid.  “We know that we can win these games and we also know that we can lose these games. Sometimes it just takes one game to turn it around and get our confidence back. It’s not like we’re getting blow out where people are being demoralized…itsjust one or two plays away.” 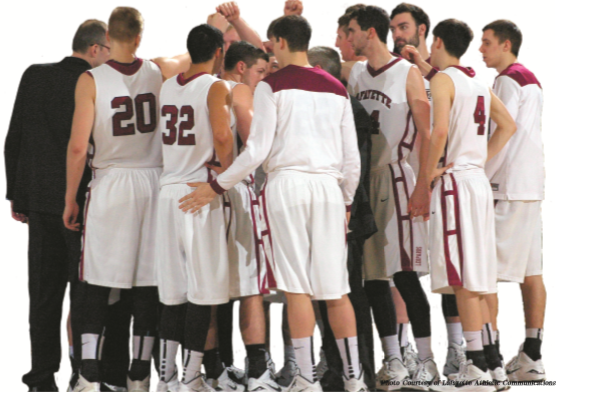