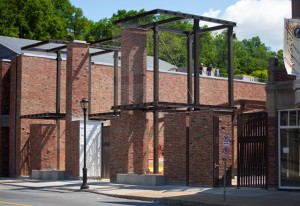 The Ahart Family Arts Plaza received a nomination for American-Architects’Building of the Year award at the end of 2014 for its unique design and use of open space.

A part of the arts campus situated at the bottom of the hill on Third Street, the Arts Plaza was Pennsylvania’s representative in American-Architects 50 States in 50 Weeks feature. Each week a different state’s representative was highlighted.

“The 2014 Building of the Week feature […] took an alphabetical look at architecture in the United States, moving from Alabama to Wyoming over the course of 12 months,”American-Architects, a network of industry professionals said.

Finished in August of 2010, the building features what project architect Wayne Stitt of Spillman-Farmer Architects calls an “urban unfill”design.

The original building on-site was an auto-repair shop that was transformed into an open-air steel and brick structure that connects the arts campus to the nature that surrounds it.

“We wanted to capture the essence of the Williams Arts building but to do it in a way that had transparency,”Stitt said. “We used the [same] brick to continue that through the project. The back side is open to [Bushkill] Creek and all of the trees there. It brings nature to the plaza.”

This key design element also provided some obstacles the team had to overcome.

“One of the challenges really was building over the creek,”Stitt said. “There’s a number of regulations that are set by [Department of Environmental Protection]. There were a number of different permits that were required so that we would protect the creek.”

Despite the issues the project encountered, American-Architects was not the only group to recognize the arts plaza.

The Plaza also received a Citation of Merit from the Pennsylvania chapter of the American Institute of Architects in 2013 and a Special Mention in Architecture + Urban Transformation Category in the Architizer A+ Awards from 2012, according to Stitt. The building was also featured at Prague Quadrennial, an international exhibit of performance spaces.

The Greater Lehigh Valley Chamber of Commerce awarded the Commercial Real Estate Development Award to the Arts Plaza in 2012, a Jan. 6, 2015 press release from the college said.

The Arts Plaza still has a chance to add more awards to the list. Voting continues until Jan. 31 to determine the most popular project. An editor’s choice will also be honored. American-Architects will feature both top building in their eMagazine and their website.