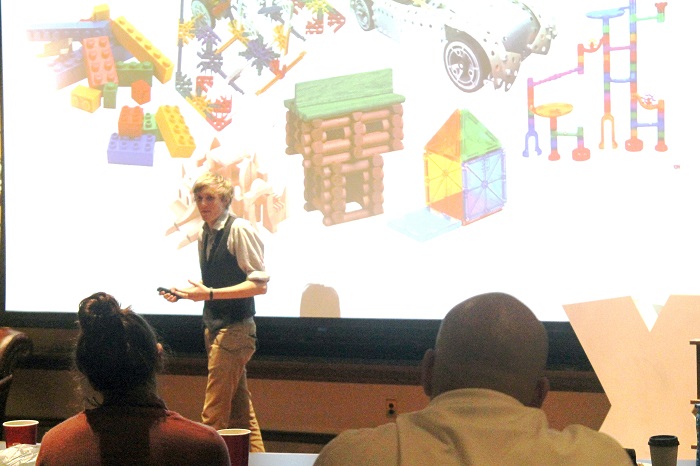 Thomas Williams ‘18 presents on his experiences with creativity.

Creative spark can come from anywhere. It may be helping students on the other side of the globe, coping with cerebral palsy, or the link between a country’s ability to attract others through its culture and creativity.

Seven students spoke last Tuesday night about their unique and inspiring experiences at an annual fall conference for student speakers.

Organized by TEDxLafayetteCollege, the talk brought together speakers with insight on creativity.

“We like to have a general theme to provide a sense of cohesiveness…Some speakers referenced [the theme] directly, others didn’t, but all had to deal with creativity in some way,” said Austin Bashline ‘16, a member of the club’s steering committee.

The speeches ranged in topics, from one student’s mission to provide educational opportunities in her home country of Madagascar to a reflection on society’s uncomfortable feelings towards traditional photography to the importance of organ donation. Daniel Geller ’18 addressed his experience coping with cerebral palsy on a daily basis, despite not knowing of his diagnosis until his teen years.

“[Daniel] had a way of speaking that really conveyed the emotions he had overcome,” Jennifer Barnes ’17 said.

“I don’t like reading my speeches verbatim,” Manan said. “Even tonight I added a couple of things, because I think that’s what keeps the originality in tact.”

Speakers received help constructing and timing their topics in a way that framed them as a story.

“You can talk about [a topic] in a conversation at a table, but giving a talk about it is a whole separate matter,” co-president of TEDxLafayetteCollege David Hanke ’16. “Our challenge is making interesting stories compelling as a ted talk.”

Audience members left the talk both moved and motivated.

“It was very inspiring and to see how these people have overcome obstacles in their life that a lot of people don’t really think about,” Barnes said.

Despite the completion of the fall conference, the TEDxLafayetteCollege club’s work is not done. The organization is now preparing for a spring conference, which will feature speakers from around the world.

As organizers work towards the next event, both Hanke and Bashline noted that the club would place a greater emphasis on advertising and publicity.