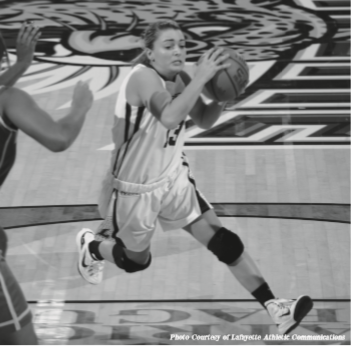 Junior guard Jamie O’Hare cuts to the basket for an easy layup.

The Leopards are 4-2 coming off of a hard fought victory against Penn on Tuesday night. The team scraped by, winning 60-57. The win was much needed for the Leopards, coming off of a loss on the road to Louisville, 102-61.

Despite the decimation, junior guard Jamie O’Hare had a season high 20 points, beating out Louisville’s high scorer by two points. The Leopards took the loss in stride; they had realistic expectations about facing the 12th ranked team in the country.

“I think my success came from not stressing out about the outcome,” O’Hare said. “It wasn’t a game that was dire and I thrived off of the intensity that came with playing such a high caliber team. I let the game come to me and capitalized on every opportunity that came my way. It was a lot of fun.”

O’Hare also hit a key jumper in the last two minutes of the Penn game when the Leopards were down 57-56. This was a more collective team win, with every player stepping up in crucial moments.

“The win against Penn was very rewarding,” O’Hare said. “They are a very good disciplined team who scouted us well and we had to fight for everything. It was a great team win because it was the type of game where we all needed and depended upon one another.”

Senior captain Emily Homan also came up big that game, scoring a season high 29 points. As a guard, O’Hare knows to feed the ball to a prominent scorer like Homan to give her as many touches on the ball and get as many opportunities as possible to be successful. As a whole, the team can really thrive off of someone, whether its Homan or O’hare, and have a great run. It opens up everyone else’s game when all of the attention falls on one player.

In the face of all of her success, the 5-6 guard has just one thing on her mind.

“I want to win a Patriot League Championship for our team,” O’Hare said. “I just want to perform my best in every game in order to help my team be successful and improve every day. My personal goals are the team goals.”