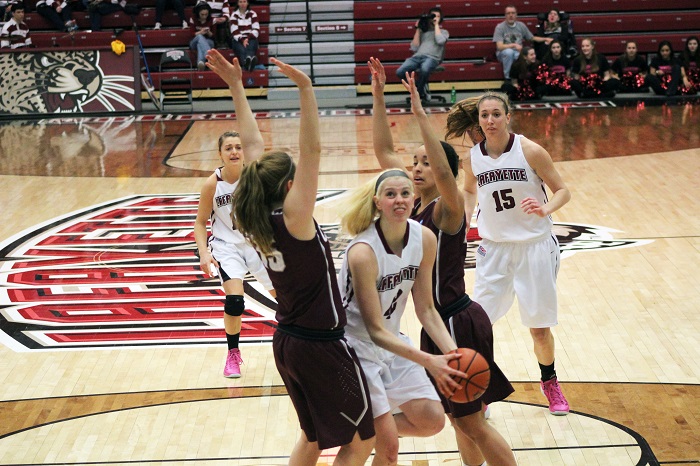 Adam Nussbaum: The team had a big win in the season-opener on Friday against Delaware. How does it feel to start the season on such a high note?

Harriet Ottewill-Soulsby: It always feels good to get a win but the season opener is particularly important because it gives our confidence an early boost. A college team changes from year to year as seniors leave and freshmen join and win early on confirms our feeling that this season’s squad is bonding and working well together.

AN: What are some of your goals for the upcoming season?

HOS: My goals this season are to keep working on my game and do my best for the team. I want us to build on last season and finish higher in the league. I also hope to put in enough hard work to be a contender for a Great Britain National Team spot as we compete in qualifiers for the Olympics.

AN: Is there anything in particular that you didn’t accomplish last season that you are aiming for this season?

HOS: I’d like to make an impact earlier on than I did last season and I think I’ve made a start on that.

AN: How different is it to play in the US rather than the UK?

HOS: There are some minor rule differences to playing in Europe, but maybe the biggest difference is that basketball is a mainstream sport here. I didn’t start playing until later and if I’d grown up in the US, I don’t think I’d be able to remember when I first picked up a basketball!

AN: What’s your take on the Lafayette-Lehigh rivalry? How does it feel to be a part of it?

HOS: Being from England, American football is still quite a mystery to me but even so the Laf-Lehigh rivalry is very exciting and historic. It’s about school pride and spirit and while I don’t have a lot of football knowledge I do have a lot of that.

AN: What’s your favorite rivalry?

HOS: Glasgow Celtic and Glasgow Rangers. My cousin is the goalkeeper for the Celtic.

AN: Did you play over the summer?

HOS: I played a lot over the summer! I went to camp at the beginning of the summer to train with the Great Britain Senior women’s squad and captained the U20 team at the European Championships in July. For the first time I played against a teammate because Annete Snow was there playing for Israel!

HOS: I don’t have any myself but we have a team chant that we do before every game.

HOS: I was born in Holland.