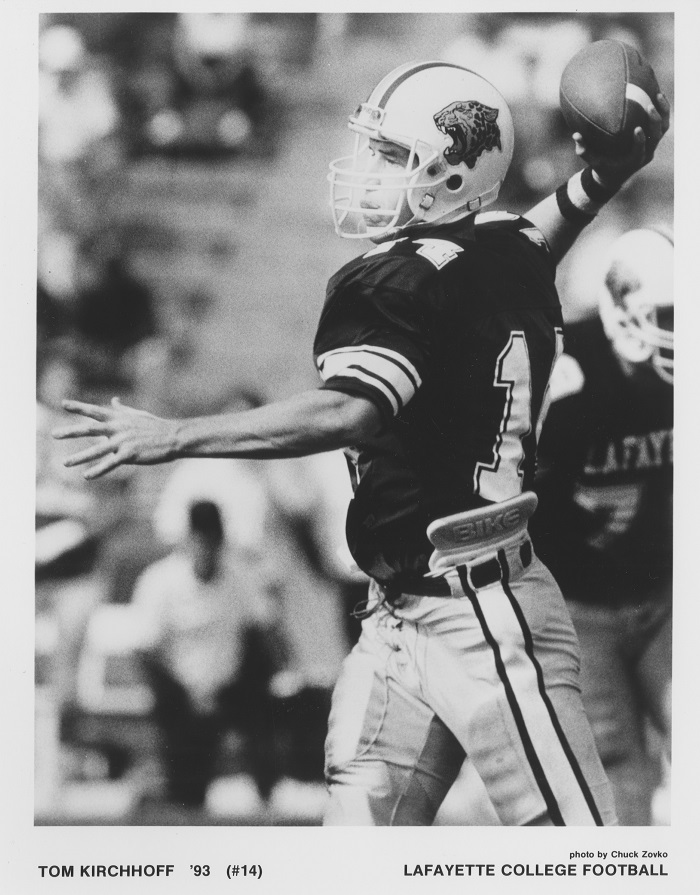 Third all-time leading passer, Tom Kirchhoff ‘93, has been involved with the football team since graduating.

Two weeks ago, Lafayette’s third all-time leading passer and Maroon Club Inductee Tom Kirchhoff ’93 was expecting a visit from fellow alumni. He did not expect, however, that his former football coach would arrive at the rally for a special presentation.

With Kirchhoff’s family, friends and employees of his company Cleveland Brothers in attendance on Nov. 13, Lafayette’s head football coach Frank Tavani named Kirchhoff, who has been diagnosed with ALS, the honorary captain for the 150th meeting of the Lafayette-Lehigh rivalry.

“I didn’t find out until Coach Tavani announced it at the pep rally,” Kirchhoff wrote in an email. “He told my wife in advance, but surprised me. I’m humbled, honored and proud. It’s really an honor for all of my teammates as well. Football is the ultimate team sport and we will all share the honor.”

ALS, or Lou Gehrig’s Disease, is a neurodegenerative disease that results in symptoms such as muscle atrophy and speech loss. Kirchhoff, who was diagnosed in 2010, uses a wheelchair and has lost his speech ability.

Usually, it is a team captain’s duty is to prepare his team for a big game. Kirchhoff will do just that for the Leopards. Coach Tavani asked Kirchhoff to write a speech to be read to the players prior to the game, according to Associate Director of Alumni Affairs Christiane Conn Tomik ’03.

“[Coach Tavani] is THE Reason I went to Lafayette and has remained a great friend that I can always count on,” Kirchhoff wrote. “He’s a special guy. The football program means a lot to me. That program has meant so much to me over the years. I’m proud to give them my support any way I can.”

The rally’s original purpose was to bring part of the game to Kirchhoff if he wasn’t be able to attend.

“He has been very involved with the football team and with Lafayette College since his graduation,” Tomik said. “One of his goals has been to make it to the game. He wants to be at Yankee Stadium. There was some thought that he might not be able to attend, so this was an opportunity for Frank to bring him the signed game ball and name him the honorary captain of the team.”

Despite doubts that he would make the trip to New York, Kirchhoff will be cheering on the Leopards from Yankee Stadium with his entire family. He plans to meet up with some of his former teammates and fraternity bothers.

His time with the team will stay with him as he witnesses Lafayette play in the 150th meeting of football’s most played rivalry.

“I look back on it with a lot of pride… especially because we were able to kick their ass and win the Patriot League Championship my senior year,” Kirchhoff wrote. “It has provided a lot of great memories over the years.”

During a busy and historic week for Lafayette football, Tavani took time to reflect on Kirchhoff.

“Tom Kirchhoff was the most tough-minded football player that I ever coached, and the toughest person I have ever met,” Tavani wrote in an email. “It was an honor to coach him and an honor to have him as a friend. Our prayers are with him always.”

The event honoring Kirchhoff was part of a 15-day cross-country trip Michael Weisburger ’82 and Jenny Marshall Weisburger ’82. The couple, who reside in Bedford, NY, held rallies across the country to raise excitement in the Lafayette community before the game this weekend.

Beginning in Los Angeles, the trip ended in Easton last Saturday as the start to Rivalry Week. Along the way, the Weisburger’s made stops in various cities to meet alumni. According to Executive Director of Alumni Relations Rachel Nelson Moeller ’88, alumni at each stop signed a large banner with encouragements for the team. The banner will make the trip to Yankee Stadium for game day.

One thing that was apparent at each stop was the community’s excitement for Rivalry 150.

“The gratitude people expressed that we had stopped in their town,” Jenny said. “People were really appreciative and really fired up about this game. It’s crazy. [We] didn’t think people from California would be doing it. Old people, young people, so many people are going to this.”

The original idea for the trip came from Alumni Association President Alex Karapetian ’04 last spring, according to Moeller. Karapetian then turned to the Weisburgers for help with the trip.

“After an alumni council meeting I was talking with Alex,” Michael said. “He said, ‘Weissy wouldn’t it be really cool if we arranged to have a game ball carried across the country from California to New York with stops along the way?’ and I said ‘I’m your guy.’ The rest is basically history.”

The trip proved successful in creating buzz for the game within the Lafayette community.

“This is an historic event,” Moeller said. “This is an opportunity for everyone in the Lafayette family and community to rally around this wonderful tradition and to feel pride about Lafayette. It was an awesome trip and the Kirchhoff event was really a highlight of it.”