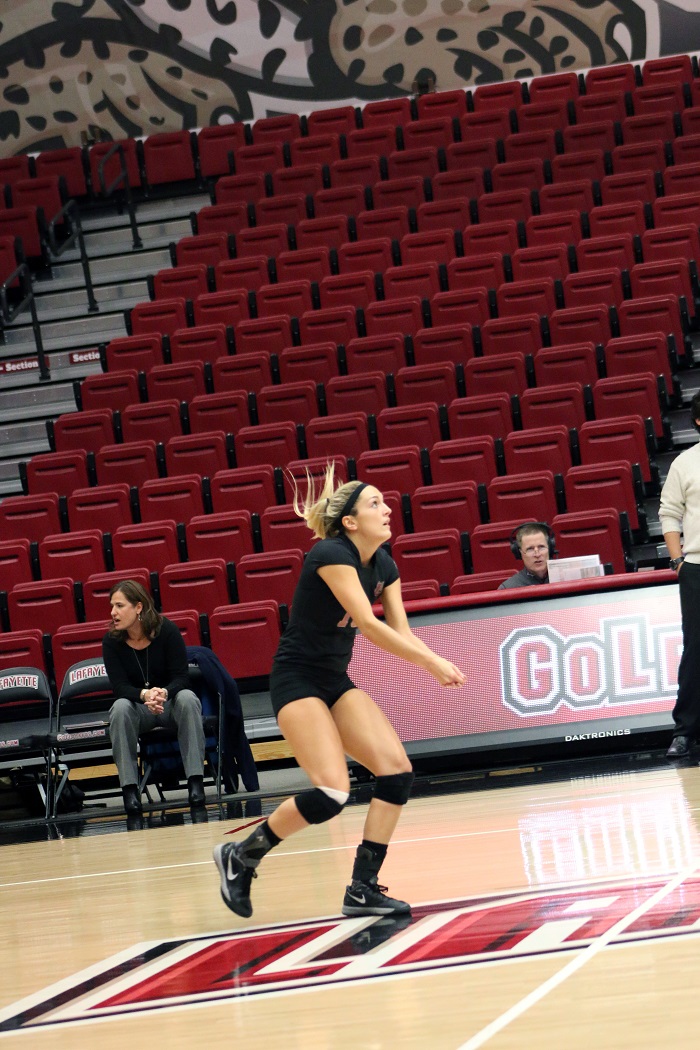 Junior Lauren Pisauro leads the team with a total of 391 digs on the season.

Two games, one weekend, one chance to go out with a bang.

With an overall record of 5-21 and a Patriot League record of 2-12 Lafayette Volleyball was unable to make it to the postseason this year. With their last two games against Army and Holy Cross, the Leopards looked to finish strong. Lafayette took both teams to five sets this year, with a heart-breaking two set lead on Holy Cross only to lose in the last set.

The team’s tumultuous season had nothing to do with lack of ability or want to succeed. It was a tough year with unexpected injuries resulting in other players having to step out of their normal positions and fill in the gaps. Returning sophomore Samantha Volk, the team’s primary setter was injured. What seemed like a series of unlucky events, Volk’s freshman replacement Madeline Titus also became injured forcing freshman right side hitter Tori Smith to step up.

“Putting a right side hitter- someone who’s never really set or run an offense- definitely made things very challenging for us but we responded as well as we possibly could have and we found a lot of success in doing that,” said Head Coach Terri Campbell.

“Adapting to new challenges was a big focus of ours this year and I think we did a pretty good job of it, even though our record might not reflect it we came a lot closer in games this year than before,” Rooney said.

To support Rooney’s statement, the Leopards took a set from every Patriot league team except for Colgate and American, showing that they can compete despite facing adversity.

On a positive note, some of the major injuries seen this season seem to be going away. Samantha Volk was able to play in last weekend’s contest against Bucknell. Currently, it is hard to predict what the future will hold for her medically, because her current diagnosis is unclear. Coach Campbell hopes that she will continue to get stronger and return to the strong player she was her freshman year. Throughout the rocky season, Coach Campbell impressed the players by bringing them together on a daily basis to rise to the challenges that lied ahead. She did the best any coach could to bring together a team experiencing unique changes.

Captain Katy Rooney has a positive outlook on the weekend.

“I think it’s a rare opportunity for teams to be able to end on a win because teams go into the tournament and most of them end on a loss,” she said.

The goal for the Leopards is to get two wins this weekend, a goal which the team thinks they are certainly capable of achieving.