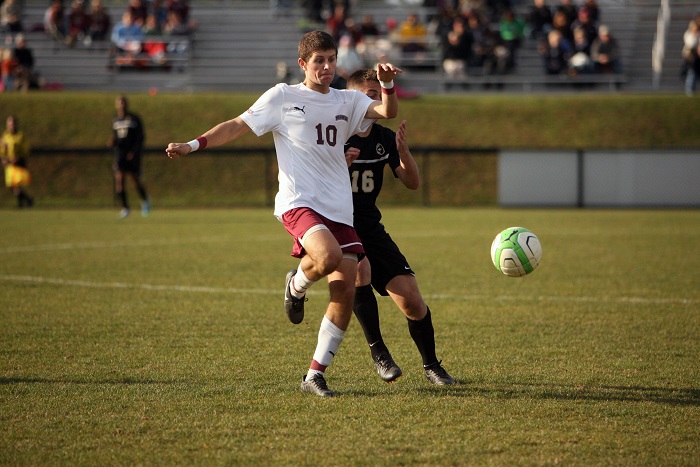 Senior Ryan Dodds finished his Lafayette career with the game winning goal in the 102nd minute of the game against Loyola Maryland.

Adam Nussbaum: You scored the game-winning goal on Saturday. Where does that moment rank amongst your soccer achievements?

Ryan Dodds: It’s definitely up there. Scoring like that is always a great way to go out. I think the best moment was beating American in the Championship finals our sophomore year. I’ll never forget dumping the cooler on coach with 25 seconds left.

AN: Being a leader on the team, what do you feel you contribute in the locker room and off of the field?

RD: Leading by example and being vocal. Guys feed off of energy and how hard they’re working. I try to encourage all of the younger guys and teach them the standard that has been set before us.

AN: How do you feel about the returning team next season?

RD: Pretty great. We have a lot of returning key players, including freshmen that showed up with great performances including Brad Seeber, Chris Moyse, Dan Felman and Wyatt Fabian. They played crucial minutes and will get even more next year.

AN: When did you start playing soccer?

RD: For as long as I remember. I have two older brothers who played and my dad works in the industry, so I’ve always been around the sport.

RD: The whole senior class. Julian Plummer who got selected to the All Patriot League 3rd team; he played every minute and has been unbelievable. Also, Eric West for being Mr. October and having four goals in four straight games.

AN: Nearing the end of your Lafayette career, do you have any plans for soccer after graduation?

RD: No. I achieved every thing I wanted to and now it’s time to hang up the cleats.

RD: I listen to the same songs before we play and tape my wrists a certain way before every game.