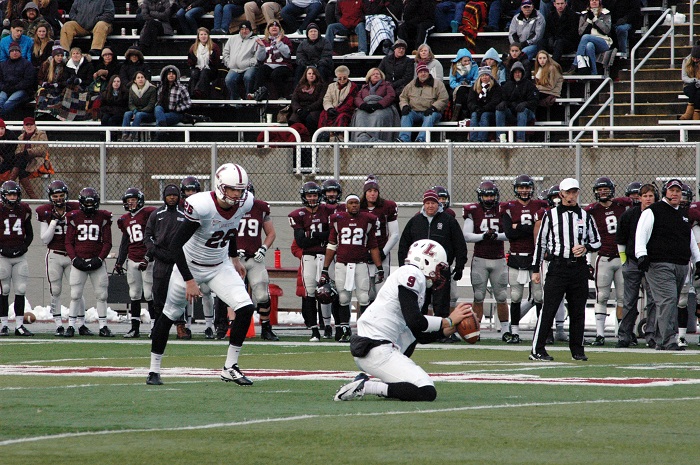 It’s not every week that a player comes off the bench and dominates, but on a brisk Saturday afternoon last weekend, Lafayette’s backup quarterback, Blake Searfoss ’17 did just that.

It’s been a bumpy road for Lafayette’s quarterbacks this season as starting QB, Drew Reed ’17, has struggled with various injuries. However, Reed’s absence from the playing field has given his good friend, Blake, the opportunity to make the most of some well earned playing time.

In his second year as a Leopard, Searfoss has shown that he has what it takes to compete for a starting spot. With only one game left in the season, the two quarterbacks have nearly identical offensive statistics. Both players have a 60 percent completion percentage, throwing seven touchdowns a piece on just over 1,000 passing yards. Blake, however, has played in all ten games, while Drew has only appeared in eight. When it comes to competing for the starting spot, though, Seafross hasn’t let his recent success go to his head.

“I think the constant competition allows us to both play better,” Seafross said. “He’s a great player and I’m always learning from him. While the competition for the starting spot may be heating up, the rest of the offense doesn’t focus on such competitions.”

Blake was named Patriot League Offensive Player of the Week this past Monday, after leading Lafayette to an improbable second half comeback victory against Colgate. Seafross came off the bench in the second quarter to replace an injured Reed. Playing in a no huddle offense, Blake completed 29 passes for 261 yards. His two touchdowns passes and a successful two-point conversion erased a 16-point, second half deficit. But it was his final two drives that sealed the victory. The quarterback was 12-13 on the final two possessions, including a 37-yard bomb on a third down that would set up freshman kicker Thomas Martin’s game winning field goal, capping off a remarkable comeback.

“The win against Colgate was huge for everyone’s attitudes,” Searfoss said.

However, with Reed once again struggling with injury and Searfoss coming off of a career game, one might begin to wonder: who will lead the offense at Yankee Stadium two weeks from now? Regardless of who gets the start, Blake and his teammates are excited for the opportunity to play in front of nearly 50,000 fans.

“Playing at one of the most famous stadiums in America is going to be an awesome experience,” Searfoss said. “Once we’re on the field it’s no different than any other game and we just have to stay engaged and not get too caught up in the crazy atmosphere.”

View all posts by Nicholas Gates →