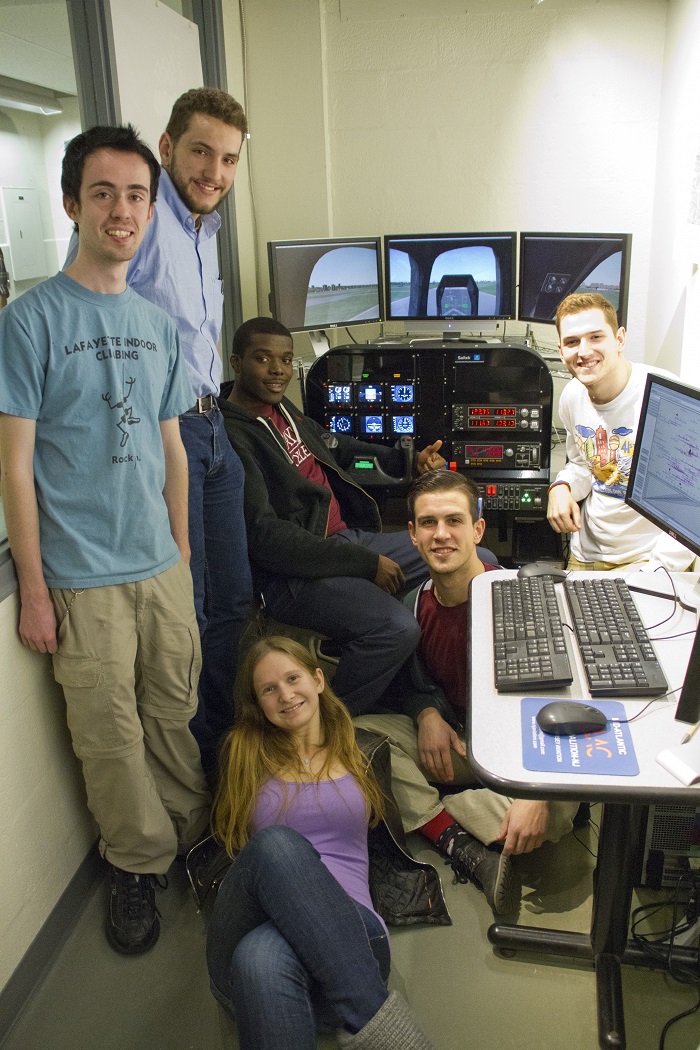 “I see aviation and flight as tools in which to spark imagination in others,” Club President Barker Carlock ’17 said. “I mean really, who doesn’t think flying is magic?”

Carlock started the club in the spring of 2014 with the help of Vice President Greg Flynn ’17. Since the club’s inception it has been growing in scope and reach. The idea for the club began to take shape when Carlock and Flynn, both licensed pilots, began discussing their shared love for aviation in an introductory engineering class.

Lafayette College Aviation Club is not a flying organization, despite initial attempts to be one. While the club hopes to help Lafayette students experience flight, it is unlikely that students will be able to fly with the club, due to the liability issues for the college. Even though the club does not currently fly, the founders still see value in having an outlet for students to learn more and share a passion for aviation.

Carlock and Flynn have constructed an advanced flight simulator for the club, with the help of money from student government and visiting mechanical engineering professor Matthew Rhudy, who holds a Ph.D. in flight controls.

“Since the college did not allow our club to allow members to fly, we agreed that a simulator would be a good compromise in still being able to teach members basic principles of flight,” Carlock said.

The flight simulator provides a unique experience for students looking to try out aviation. The simulator is open to be used by members of the college community. Over 60 people, from a retired navy pilot to a twelve year old child, have already used it.

“In the end, our club is trying to use flight as a tool in which to further broaden the perspective of the Lafayette student,” Carlock said. “Flying truly gives people an entirely different perspective on life.”

In lieu of flying, the club spends a great deal of focus on education and ground training. In addition to educating Lafayette students, the club also goes out to mentor the community.

“For the past year, we have also participated in a mentoring program over in Alexandria, NJ at [airport] N85 to mentor high school students on some RC and aviation projects,” Carlock said. “After we helped them build and complete the projects, they presented them at an aviation conference at Princeton.”

The club serves as an educational and non-flying organization, yet it aspires to one day get Lafayette students in the air, as well as own and operate at plane at Braden Airpark, an airport near campus.

Lehigh Vally Airport Authority Executive Director, Charles Everett Jr. explained that the airport is currently losing $250,000 annually, but he hopes that flight training will return to the airpark, perhaps through retaining a fixed based operator (FBO) that would provide services including ground handling, fuel pumping and flight training.

“Realistically it will take time to find out about feasible options [for keeping Braden in operation],” said Everett. “[We hope it] will one day be a break-even operation.”

While Lafayette does not currently have the resources for an aerospace major, the club hopes to create a minor program. As club members see it, a minor would allow students to work on obtaining a pilot’s license in tandem with taking classes, which could ultimately lead students to pursue a career in aerospace industries. Lawrence Malinconico, advisor to the club, notes that there are many careers in this industry from commercial pilots to air traffic controllers.

Both the club and a minor program, if it is eventually created, provide students with the unique opportunity to explore their interests in the field.