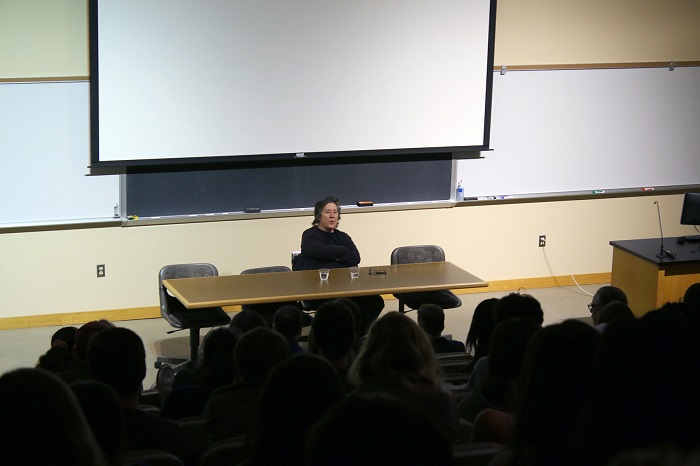 A Tuesday night in Oechsle was met with acclaimed American film producer Christine Vachon did not enter the room with a planned lecture on Producing 101. Although her success in the area is obvious – Vachon has produced acclaimed films such as “Boys Don’t Cry” and “One Hour Photo,” and has been running her successful company, Killer Films, for nearly two decades – but also attended various classes while she was here that wanted to hear her speak further. She was in no way making a presentation on the what, when, why and how of her career path. Professor Andy Smith gave a quick run-down of her accomplishments at the beginning of the talk, and then the rest was up to the audience to dictate what topics Vachon would confront.

Vachon was everything you’d expect in a successful producer – quick and to the point. She did not answer a single question the way she thought it would like to be answered, but rather with the most honest answer she could give. When she spoke in my class the following morning, a student asked if she ever gets overly-invested in a project to the point where it is affecting how successfully she completes the project. Answer: “No.” As the classroom waited for an elaborate, heartfelt story on a particular film that stole Vachon’s heart, she quickly brought us back down to earth with a firm, “No. I do not get invested.” A passionate story about her love for a certain project would have been nice, yes, but it’s simply not the job description of a successful producer. She makes sure the film is done and done right.

A film producer’s job is to oversee all aspects of the creation and production of a film, beginning with the story that is trying to be told. The producer must take a chance on the filmmaker and believe that their vision has the potential to be expressed in an accurate and captivating way. Vachon is known for producing low-budget, cutting edge films that feature emerging performers and directors.

“Low-budget filmmaking is like childbirth. You have to suppress the horror or you’ll never do it again,” Vacchon said. While modestly underplaying the glamour and fame of being a well-known film producer, Vachon’s passion for what she does was something that was shown, not told. The more she talked about her work on a certain film, the clearer it became how seriously she takes her work and how rewarding it is for her to see a filmmaker’s vision play out.

For aspiring students looking to break into the industry, Vachon’s talk was discouraging in some ways and encouraging in others. Vachon had no idea what she wanted to do upon graduating college, and came from a university that was in no way the typical “film school.” She started working as a Production Assistant and worked her way up. Although it was encouraging to hear of someone who comes from a similar background as Lafayette students, it made it all the more clear how there is no “one way” to break in.

When she came to my class Wednesday morning, she touched on the concept of graduate film schools. Although these schools seem like the logical choice for aspiring film students, they are actually a subject Vachon was surprisingly unsure about. “It’s hard to teach about an industry that is constantly changing. These programs are incredibly expensive and I’m not entirely sure where they get you,” she said.

Vachon’s knowledge and expertise is rooted in one thing: experience, experience, experience. There are no formal degree programs in film production. The key is to learn about filmmaking as early as possible, and jump in. She answered the majority of people’s questions with a detailed story about a past project, not with a sentence that started with: “The number one thing I learned in film school was…” Finding her career in film was not a direct path, but more of an awkward stumble. Although Vachon’s talk was not a lecture in “How to Become a Film Producer,” there was not a single question she could not answer about the art of producing.