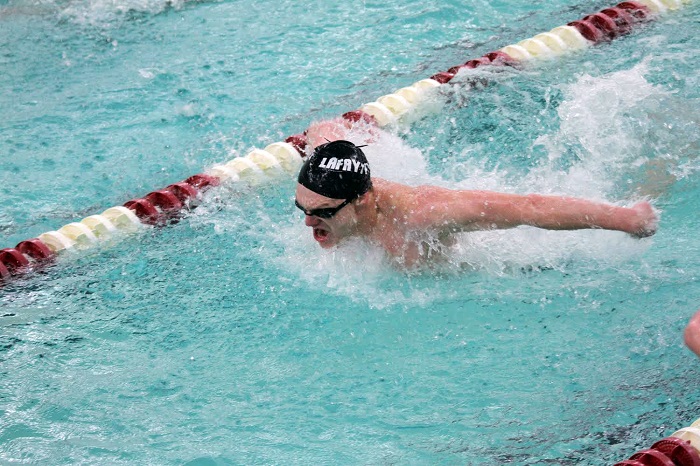 The swim team kicked off their season against Seton Hall, Drexel, and Loyola from Baltimore, MD on the 25th.

The first inter-league splash of the 2014-2015 season for the men’s and women’s swim teams will happen this upcoming Saturday at the Kinney Natatorium as the squads take on Bucknell, Navy and American.

Although the tri-squad meet is only the first of many meets, with the entire season building up the Patriot League Championships in February and the NCAA’s in March, the swimming season is a like a marathon. For the Leopards, this meet is only one leg of the race.

The men’s swimming team will be returning elite talent, a promising sign for this year’ success. The men welcome back junior Greg Grewal. Last year, Grewal made an impact by shattering the 200 breast school record at the Patriot League Championships and becoming Lafayette’s first NCAA qualifier since 1992. The Downington, Pennsylvania native earned All-Patriot League Second-Team for his efforts.

The story is a little bit different for the Lafayette women’s swimming team.

Following the graduation of the one of the strongest classes in the team’s history, the squad looks to many new and a few familiar faces to amp the competitiveness of the team.

Along with the talents of seniors Jane Kuntz and Meg Kaveney, and junior Jackie Andrews, Lafayette will look to first years Sydney Wright and Allie McBrearty.

With both budding and developed talent at all levels, Lafayette’s teams believe that they have a strong season ahead of them.

Senior Captain Jane Kuntz asserts that the “team has been training well. There have been harder and faster sets and the team has focused on lifting much more than any other season before.”

The Leopards know that an improved standing in the Patriot League Championships will take a cohesive effort and are pushing each other as a team to reach their goals.

Although the Leopards have a lot to do through fitness and strength gaining – the squad is confident that their hard work will pay off.

“Practices are tough now,” Kuntz said. “But eventually our work will pay off – we have goals in mind and those are what drive us everyday – We’re sore, but confident.”

Following the tri-meet the Leopards will return to competition in the annual Lafayette Lehigh meet.

View all posts by Carolyn DeMeo →