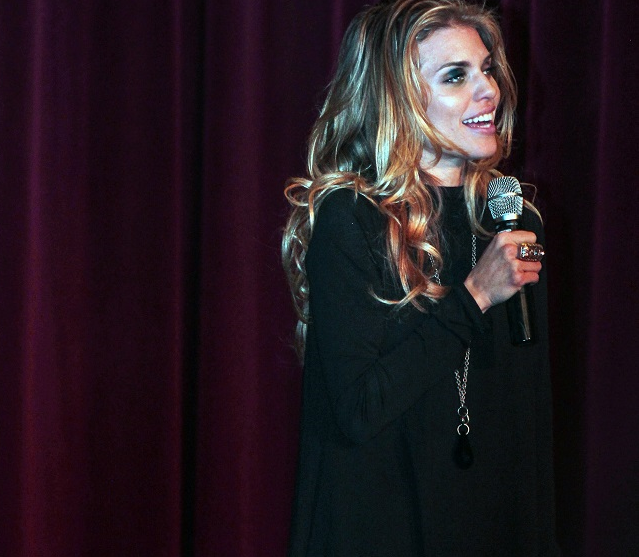 Standing onstage in Colton Chapel, actress, model and philanthropist AnnaLynne McCord owned her short black dress, knee high boots, and opaque tights. While it wasn’t the typical outfit one would wear when speaking to a group of college students, McCord chose her outfit with a purpose. “I have a right to look sexy and not be raped,” she said.

McCord’s confidence remained throughout her speech. She joked around with the audience, was honest and blunt in her stories, and referenced inside jokes between her and her friend Kirk, who was sitting proudly in the second row. However, it quickly became evident that this outward confidence had not always been present.

Within her first few years on her own in Los Angeles, McCord was raped in her own home by someone she knew. The experience has led to her journey to find her inner voice and healing. Her “I Choose” campaign supports sexual liberalism and the freedom of choice. The “I Choose” film, which was directed and produced by McCord, has helped to raise awareness about the need to support the rescue, rehabilitation and education of enslaved people all around the world.

The Lafayette sat down with her to talk about her experiences and how they brought her to where she is today.

What was it like sharing your story while being in the public eye?

It’s interesting because a lot of people told me you’re so brave, you’re so brave. That was the thing that I kept hearing, which was obviously a very nice thing for people to say, but the response that I would have for that is that I’m thankful that I’m at a place in my life where I don’t feel brave about it. To feel brave means that you’re in fear and you do something courageous. I no longer have any fear and shame about this, so I can say it and have it not be a thing that’s overwhelmingly difficult, or something that I would then feel fear about having said and wanting to redact it. That was incredible, and then obviously what came from it was incredible because I’ve been able to be in touch with hundreds of survivors, who have emailed me personally, and I have of course responded and I continue to correspond with all of them. I’m trying to keep up, but I want to personally respond to each of them. Obviously their stories are all very personal to them and some of them have never told anyone but me, some stranger on the other side of the world. But they felt a bond with me because of this article [in Cosmopolitan] so it really gave me an incredible platform. And now I’m here- at college, so it’s awesome.

Who was the person you could confide in most when you first decided to share your story?

Kirk. You know it was really serendipitous that I started this tour at Lafayette. I didn’t really put two and two together initially, but I believe things happen for a reason, and it came into my awareness as I was making plans for accommodations and flights, I was like, ‘Kirk, I’m flying really close to you.’ He lives in Reading, and he’s like, ‘Uh yeah really close.’ Kirk is the one in the story, my friend who said, ‘you’re in love with him, you’re in love with him’ about my assaulter. He was in the friend group. He knows the guy and he was the first person I admitted that I was raped to without really having ever acknowledged myself before that point. So to be able to be here with him, it’s all very serendipitous. So I would say Kirk was a crucial person in that period.

On an episode of “90210,” your character Naomi was raped. How was it to film that episode emotionally?

It’s ironic that you bring this up, and I talk about this in the Cosmo article a little bit, but basically when I did the rape scene this was prior to the moment that I came to realization that my story and Naomi’s story were actually almost the same. I did the rape. It was as a lot of entertainment rapes are. It was forceful, it was aggressive, she didn’t want it, she was fighting. That was not my story. My story was in my home, with my friend. 80% of the stories are this story. The one where you don’t know you can say no. You feel maybe you gave him the wrong impression. You’re so conflicted. So during the rape itself with Naomi I thought, I’m just an actress. I went there, we did it, and I was like, ‘no come on grab me harder.’ I was very much into making it as real as possible. Cut to months later when we’re doing the Naomi aftermath— her insomnia, all these things that are in my life, that I’ve suffered from and that moment where she is confronted by Silver who says, ‘you’re in love with him.’ His [Kirk’s] words came out of her [Silver’s] mouth. I had read the script. I knew the story. I knew this was coming. It was the moment that we shot my side, we shot all of it, but when it turned around on her [Silver], she got as intense as it felt in that moment. Kirk wasn’t really intense with me. He’s like a big brother. He’s antagonizing, but the intensity of the feeling and her intensity as an actress matched them and I had an implicit memory, and I just panicked and I went into hysteria and she [Silver] was thanking me for such a giving performance. That was not a performance. It was very real, so that was the moment that actually triggered it. You know we have all these little moments that build up into the moment we have now. That was another moment that got me a little closer to acknowledging myself and realizing that I had suffered in this way.

What do you think is the most important thing to tell girls who have been through this to remind themselves as they’re trying to cope?

Well I’ll tell you what I tell the girls that I email back with— some of the girls I Facetime with depending on their situation and my schedule. I try to be as available as possible because of how sensitive this is in this moment. I hope to change that. I hope we talk about rape. I hope we talk about sexual assault. I hope we talk about sex, and we just make it a conversation because that’s what it needs to be, but while it’s still sensitive in society and it’s very shameful for the victim I say this, I was raped one night, but I was raped a million times in my head. The moment you want the rape to end you can stop it. In that moment you can stop it. So telling the monster in my head that he no longer had free rent to hold up in my head was the beginning of me unlocking what I call my mental brothel because I work with survivors of sex trafficking who have been in brothels physically. I was in a mental brothel. I was locked in and I was being raped. I was being abused everyday of my life until one day I said, “My mind is so powerful I don’t want to be raped anymore. I don’t want to be abused anymore,” and that began the process. And it’s a day-to-day thing. You have to say that every second of every day, and then you have that moment and then five seconds later you’re able to say, “Stop, I don’t want this happening.” And then you’re in the middle and you can stop it in the middle of it, then you stop it before it even comes. Its practice makes the master, but that’s what I would say.

Can you share about some of your work with sex trafficking victims?

I work with a program called AFESIP. It’s based in Cambodia. NewSomalyFund.org is where you can learn a lot about it. I personally advocate and fundraise and spend a lot of time in Cambodia. I always bring Christmas gifts and school supplies, but what I’ve really come to learn is what slavery is and who is affected. We don’t have 30 million slaves. We have seven billion slaves. We have slaves of the mind. I was in a mental brothel. Seven billion of us have been affected by mental slavery whether it’s someone’s opinion that we believe that’s not true about ourselves and we’re demeaned and we put ourselves down because of what someone said or the way society says, “this is beauty and this is wealth and this is success and this is what means something,” and you say I don’t have that. That’s slavery, so if we think of ourselves and we say I don’t want that for myself, then we’ll stand up and fight slavery. So I’m a part of it for many reasons.