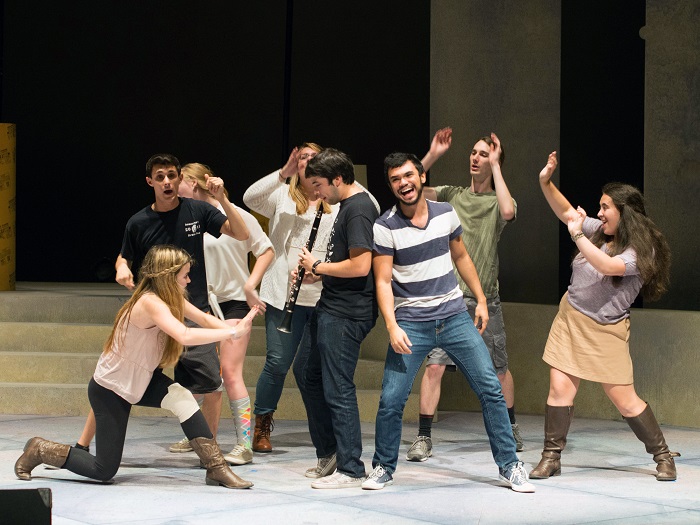 Successful performers of musical theater are thought of as triple threats in that they can successfully sing, dance, and act onstage. However, performers in Lafayette College Theater Department’s rendition of “Xanadu” were given yet another challenge: they have to maintain their abilities as triple threats while on roller skates.

The musical is based on the 1980 cult film, and was written by Douglas Carter Beane, with music and lyrics by Jeff Lyne and John Farrar. Director Mary Jo Lodge chose this show for many reasons, one of which being that she has recently directed many serious musicals and plays at Lafayette, so she knew she wanted to choose a comedy. In addition, the movie was one of her favorites as a child.

“I happened to be in NY when the Broadway one was running with the original cast,” Lodge said. “I saw it I had nostalgia for the original, but I thought the new one was so funny and so clever and so interesting.”

There are twelve people in the cast, which is a bit expanded from the Broadway version. However, Lodge feels that the entire cast has become fully immersed in their roles.

“One thing we’ve been doing is I’ve taken a lot of inspiration from pop culture of the time,” Lodge said. “So we’ve had a lot of fun with replicating famous music videos.”

Other than the roller-skating, one of the biggest challenges the cast faces that is their very little downtime. While the lighthearted tone of the show makes it appear simple, quick costume changes and long song numbers pose difficulties for the cast. Nonetheless, the students involved in the production are optimistic about the performance.

“It’s so cheesy that it makes fun of itself, and that’s why it’s a fun show,” Assistant Stage Manager Madeline Kraft ’18 said.

A team from New York is designing the production. In addition, due to support from the Mellon Grant, Broadway musician Kevin Kuhn is being brought in to play in the pit for the show. The professional guitarist is taking a weeklong absence from playing in Broadway’s current production of “Aladdin” to perform in Lafayette’s production of “Xanadu.”

“Xanadu” runs in the Williams Center for the Arts Main Theater from Wednesday, November 5 to Saturday, November 8.