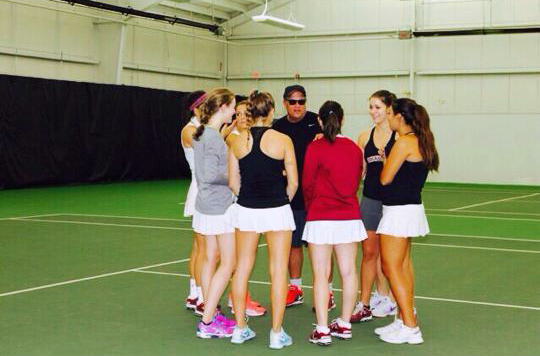 The women’s tennis team huddles up during practice to discuss technique.

As most of the fall teams prepare to wrap up their seasons, the men’s tennis team is heading into a hibernation period to get ready for their season in the spring.

The tennis team has a competitive season in both the fall and the spring, requiring a year-round commitment from every athlete. During the fall, the squad competes in individual tournaments, battling for positions on the team rather than points in the league. The spring season marks the start of competitive Patriot League play.

Lafayette has had a successful fall season. “Everyone picked up wins,” senior captain Brandon Goldstein, who earned a doubles win against Bucknell, said. With the 2014 match schedule in the rear view mirror, Goldstein and his teammates now begin the process of individual training in the winter months.

Unlike some teams, there is no formal practice or training for the remaining part of this semester. Many of the players, however, spend time over winter break playing at tennis academies in places like Florida, honing their skills before coming back to Lafayette for the spring semester.

Once arriving on campus, the team starts training back up with indoor practices at the Northwood Country Club in Easton. From there, the team will up their practicing schedule. “The more matches you play, the more you learn,” Goldstein said. He sees the winter months as a period to build upon successes from the fall.

Nonetheless, there are some limitations and adjustments that come from winter training. Switching from indoor courts to outdoor courts can be an ongoing annoyance for the players. “It’s tough coming off of practicing indoors and dealing with that transition,” said Brandon who, as a senior, has plenty of experience in making the seasonal adjustment.

Tennis’ official season starts in February, without a Patriot League match until late March. This should give the Leopards plenty of time to prepare for league play as they hope to better their 1-7 record from last season.

View all posts by Nicholas Gates →