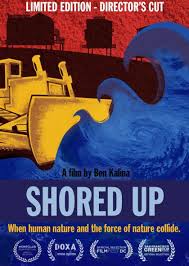 Director Ben Kalina screened his 2013 documentary “Shored Up” on Tuesday, a film about whether or not the rise of sea level and coastline disintegration can continue to be ignored. Kalina’s focus in the documentary was on the eastern seaboard, particularly the effects on New Jersey and North Carolina.

As coastal erosion continues, development along the shoreline also continues, and the two inevitably collide, Kalina said. In a nutshell, the shoreline is disappearing, coastal properties continue to develop along the waters edge and therefore are becoming more vulnerable to hazardous situations, such as major storms. Kalina mentioned in his question-and-answer session how he wanted to point out that these hazardous events are a pattern in history and are bound to occur over and over again.

There was a constant tension throughout the film between what environmental scientists are telling us about the effects of climate change and what politicians believe to be the right course of action.

One of the areas Kalina chose to focus on was Long Beach Island, New Jersey, a place that has experienced catastrophic damage for residents along the coast. Kalina said a lot of the justification for why there is residential development along the coast is based on the economic benefits of tourism. However, the irony of this is that without the beaches, the island has no business. He talked about how he filmed the documentary at an opportune time because there was a major beach replenishment project happening on the island.

Beach replenishment, or beach nourishment, is the dredging of sand from further off shore on to an eroded shoreline to stabilize and increase the size of the beach and dunes that position and provide protection from shoreline retreat and coastal flooding. However, one of the former mayors in Long Beach was interviewed and mentioned how beach replenishment “is like putting a band aid on a hemorrhage.” People often do not want to accept the power the water has, according to Kalina.

Hurricane Sandy makes up a large portion of the film, and only furthers the point Kalina is trying to make. He mentioned how people tend to label Sandy as “the wake-up call,” however not a lot has been done to change the course of development along the coast since the storm’s occurrence. “The difference is almost indistinguishable,” Kalina said.

Kalina emphasized how the federal government needs to be encouraging solutions to these problems rather than ignoring them. He said money needs to be allocated to help local, coastline areas accommodate before a major storm occurs like Hurricane Sandy. There are definitely flaws to the system in that a shoreline property’s likelihood of receiving a beach replenishment project is directly proportional to the value of that property, he said. Therefore, less fortunate, coastal areas have been left behind in the battle. There are vulnerable residents who want, and need, to start moving back from the shoreline, but cannot afford to, according to the film.

“This is a reality that has existed for a long time that we’ve been blind to, and we have also been blind to our vulnerability to the problem,” Governor Andrew Cuomo of New York said in the film.

Kalina’s documentary sheds light on how complex the issue of coastal erosion is, and helps viewers gain more insight into a problem they may have not initially been aware of.