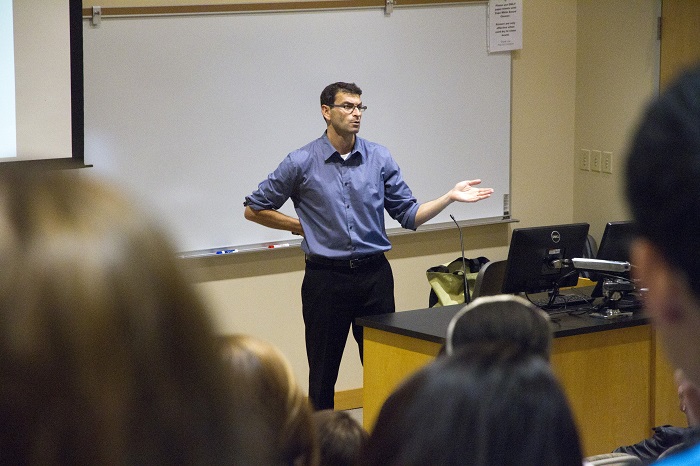 Northeastern University Professor Ronald Sandler he called attention to the question of whether or not de-extinction should be done in a lecture he gave Monday.

Sandler, whose specialty is environmental ethics, discussed both sides of the ethical issues surrounding de-extinction.

“The reason we are talking about the ethics of de-extinction is because, incredibly, it may be possible to bring back species that have been extinct for a long time,” he said.

Sandler defined de-extinction as the process of creating individuals with high levels of genetic similarity with already extinct species. Currently, the technology of de-extinction can create a clone of an extinct species for which there are complete genomes and appropriate surrogates.

A goat-like animal called the bucardo was successfully cloned from cells preserved prior to its extinction in 2000, said Sandler. But he said the animal died shortly after birth, making it once again extinct.

In the future, scientists hope to use molecular biology and synthetic genomics to reassemble the genetics information and reconstruct the genome of long-extinct species such as the thylacine, more commonly known as the Tasmanian tiger. Other candidates for de-extinction include the dodo bird, Caribbean monk seal, gastric brooding frog, and the passenger pigeon.

“We can’t utilize de-extinction with species for which genetic information does not exist,” Sandler said. “There’s not going to be any dinosaurs, sorry.”

After establishing that de-extinction is possible, Sandler moved on to discuss the ethical considerations on the topic.

“The science question of ‘Can we do it?’ has already been answered,” said Sandler. “Now we need to focus on the ethical question of ‘should we do it?’’’

“From a techno-scientific perspective, de-extinction is awesome,” Sandler said. “It’s remarkable. But we need to give further attention to the ethical perspective.”

The lecture was given in conjunction with the on-going exhibit at the Williams Art Center entitledRequiem, Ectopistes Migratorius.

Requiemis “a multi-media exhibition by artist-in-residence and avian musician Michael Pestel [that] marks the centennial of the extinction of North America’sEctopistes migratorius,the passenger pigeon,” according to a press release from the college.

Lafayette is holding other programs that deal with the extinction of the passenger pigeon to supplement the semester-long run ofRequiem.There have been lectures, brown bags and performances to foster discussion about the topic. Professors Megan Rothenberger and Mike Butler of the biology department, for example, held a lecture titled “The Loss and Resurrection of a Species” that discussed the science behind resurrection ecology.

“Right here on Lafayette’s campus, we have spent two year documenting the incidence of window-killed birds and have found that we are contributing to a problem that claims an estimated one billion birds every year,” a press release said for the Rothenberger and Butler lecture.

The exhibit was funded by an Andrew W. Mellon grant, which Lafayette received to support art initiatives on campus.

The $800,000 Global Arts Infusion and Visiting Artists grant to support fusing performing and visual arts for interdisciplinary presentations, according to the Andrew W. Mellon foundation.