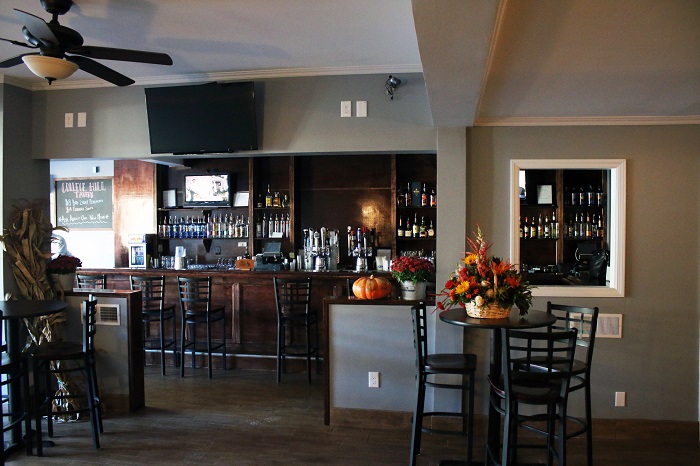 With the smell of paint still poignant, the College Hill Tavern finished renovations and opened for business last Friday, just in time for homecoming.

The main dining room and bar are completed, but the kitchen is still facing work on some of the main appliances. Although the grill was not open for food, students, alumni, and locals were able to grab a drink at the tavern this past weekend. The kitchen and grill are tentatively supposed to open this upcoming weekend, according to John Melhem, who owns the the Tavern with his brother Maynard.

The cliental during opening weekend was largely comprised of Lafayette students and alumni, Melhem said. The turnout for the weekend was a decent size, he said, but cliental is expected to increase once food is incorporated into the setting.

“The newly renovated CHT is a lot better than the bar before the renovations,” Eddie Andujar ‘15 said. “The building was more of a run-down dive bar.”

Now, the refurbished building has more of a restaurant feel and the movement of the bar from the center of the room to the left side has really opened up the space, Andujar said. He said that the renovations were well done and have made the space look more appealing.

However, the atmosphere was a bit confusing, Andujar said, because it felt like a restaurant, but serves as a bar. It would be nice to see booths in the space to create a more intimate, bar-like feel, he said.

The varieties of beers on tap and drinks exceed that of other restaurants and bars on College Hill. A pitcher of Budweiser is $8, which mirrors Milo’s price for a pitcher. The pitchers of seasonal beers tend to be priced slightly higher, around fifteen dollars.

There are tables at the restaurant available to sit and socialize, and the party scene is not as prominent as other bars in the area, Andujar said.

It may take a little time to establish a strong cliental base with the other bars on the hill, Maynard said, but the owners are optimistic that reception among the community will be good.

Although Maynard said the floor plan is too small to host live bands, the brothers wish to plan event nights such as karaoke that would draw larger crowds to the bar from both the college campus and the Easton community.

“[I am open to] receiving feedback from Lafayette students and putting more special drinks and meals into the menu that reflect their interests,” Melham said.