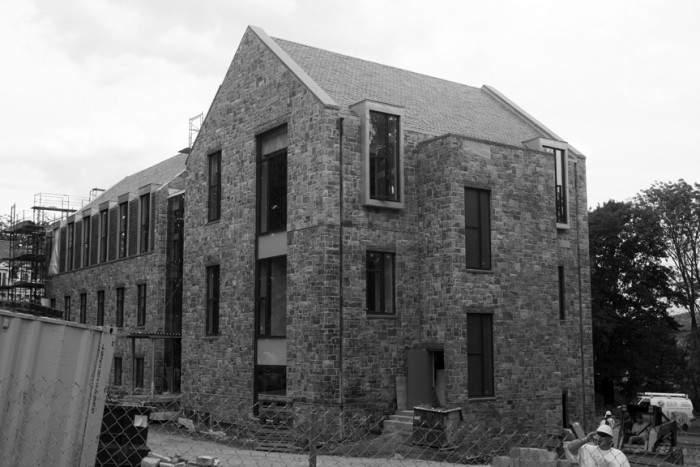 The Oechsle Center for Global Education is currently under construction and will be open for classes next semester. The building will hold anthropology and sociology classes, international affairs classes, and classes in area studies.

Oechsle Building will be ready for classes for the Spring semester, according to a college official.

The Oechsle Center for Global Education will open for classes next semester after more than a year of construction, unifying fields of study that have previously been scattered throughout the campus.

The building will be the academic home to fields that study worldly topics, such as the anthropology and sociology department, the international affairs program, and area studies programs, Director of Facilities Planning and Construction Mary Wilford-Hunt said.

Construction on the building will be completed by December, according to Wilford-Hunt, and an official ribbon-cutting ceremony will be held in January.

The project costs are about $10.8 million, covered mostly by a $10 million dollar donation from Walter Oechsle ‘57. Oechsle has given generously to the college before, most notably in 2003 when the psychology and neuroscience building was dedicated in his name.

Classes in the anthropology and sociology department are currently held in the Marquis basement, which Wilford-Hunt described as a “less-than ideal space.”

The two main anthropology and sociology classrooms in the basement of Marquis are windowless and crowded with desks, leaving little space for students to maneuver around. In one of the rooms, a pillar stands in front of the teaching space with desks surrounding it on either side. Bissell said the pillar is convenient for students to sit behind when they do not want to be seen by the professor.

“It’s very hard to get a kind of interactive class in a space like [that],” he said.

The Marquis basement was not built to be an academic space, Bissell said, but it was “retro-fitted” for the anthropology and sociology department over 20 years ago.

Sometimes smells drift from the dining hall above the classrooms. One year, a pipe started to leak and flooded many offices, Bissell wrote in an email. A large portion of the department needed to be reconstructed, including walls being taken down and carpeting to be replaced.

Before Bissell started working at Lafayette, there was also a fire in the Marquis basement, which caused “extensive smoke damage and that required extensive repairs.”

Bissell said the new building will be a space more conducive to learning and create a larger sense of community within the department.

“[The basement of Marquis has] been a temporary kind of fix,” Bissell said. “But with a department that has just become stronger and stronger, it’s time for us to be in an academic space with colleagues where there’s good intersection and there will be new opportunities for the quality of the students that we have.”

The building is designed in order to create that sense of community not only in the anthropology and sociology department, but also in other majors with a focus on global education, according to Wilford-Hunt.

The building’s lobby will extend upward through all three floors, connecting the academic space, and there will be a “flexible” classroom that has light furniture that is easy to move and glass walls surrounding it. She said these glass walls will be able to retract to make the space larger for a reception or gathering.

“The teaching spaces are spread throughout the building, intended to be flexible, intended to promote that kind of interaction [between faculty members and between students],” Wilford-Hunt said.

“Because [the international affairs program is] interdisciplinary, it’s very much spread out all over campus,” Jones said. “I’ve had classes in [the] Marquis basement, Ramer, every floor of Pardee, and Kirby, and Simon; and now it’s kind of cool to have a home-base for IA, a headquarters for IA. It sort of consolidates all of that.”

Jeffery Wheeler ‘16, another international affairs major, said that since there is now a “home-base” for the IA program, it will attract more people to the major.

The Center will also be energy efficient, Wilford-Hunt said, with low-flow plumbing, efficient insulation, and the ability for faculty members to open a window to control the temperature in their environment, instead of wasting energy with heat or an air-conditioner.

During construction, there were a number of challenges, such as rocks that were found underground at the construction site and the harsh winter, Wilford-Hunt said. But, she said these challenges did not put the project behind schedule in any significant way, allowing the building to be opened next semester.