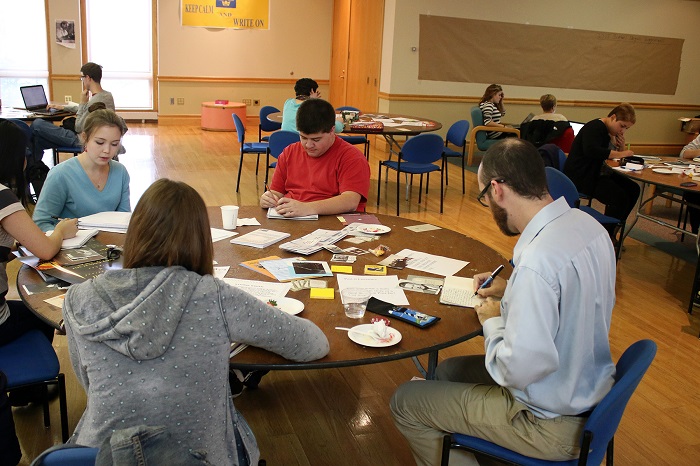 The 2014 Write-A-Thon continues to be a favorite event among students seeking literary inspiration.

“[The Write-A-Thon] is an opportunity for students to write together and extend their imaginations,” said professor Lee Upton. “It encourages creativity among students.”

There was more than enough material to stretch the students’ imaginations and encourage their creativity inside the small room that afternoon. As they entered, they were greeted by Upton and professor Alix Ohlin and handed a stack of writing prompts, a button that says “Keep Calm and Write On”, a postcard which would be their “muse for the day”, and a copy of The Marquis, Lafayette’s literary magazine. Scattered around tables were more writing prompts, famous quotes, and writing challenges. On the walls were a two-sentence horror story challenge, in which students were asked to come up with a horror story in just two sentences, and in the corner was a globe created by Connor Pirruccello-McClellan ’17, on which students could write anything they wished.

As students wrote, either alone or in large groups, on their laptops or on paper, live prompts ranging from John Paul Bisciotti’s ’15 upright bass to Sony Mathew’s imitation of a French critic, were provided for even more inspiration.

Students attended for various reasons. Some like Samantha Miller-Brown ’18 were curious and “wanted to see the writing prompts and write without being judged,” Miller-Brown said.

Others, like Flannery Keenan ’18, used this as an opportunity to catch up on a hobby. “I’m not taking any English classes this semester and I just wanted to get some writing in because I miss it.”

“The Write-A-Thon celebrates writing and brings students together so they can be inspired by each other,” Professor Ohlin said. The Write-A-Thon provides a place and time where students can write freely.