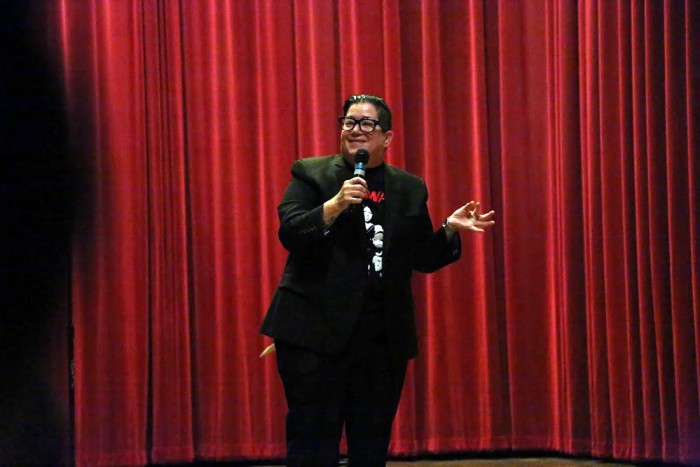 Lea Delaria entertain and enlgihten’s students with her comedic  presence

Colton Chapel erupted Tuesday with yells of “I’m a Lesbian!” Responsible for the exclamations was comedian and actress Lea DeLaria. While DeLaria’s is most-known from her work on “Orange is the New Black,” where she plays a prison inmate, she began her career in stand-up.

Her performance at Lafayette was centered upon her experiences as a lesbian comic. She elicited cheers and applause from the audience early on when she encouraged all students to accept who they are “and let everything else fall into place.”

DeLaria proudly acknowledged the influential role “Orange is the New Black” has played in creating stronger characters and a more positive and inclusive image of women in show business.

“When was the last time you saw a group of women sitting around and talking about something other than a man on whether or not their ass looks fat in jeans?” she said, summing up the gender difference she sees.

“All I was fed [growing up] was very negative imagery of what lesbians were. Especially butches. I count myself, proudly, as someone who has done something for butches and changed that image,” she said. “We’re always portrayed as stupid, as truck drivers, as drunk, as beating up on our girlfriends, as fat. But, you know, here I am portraying this fabulous butch dyke who everyone loves.”

DeLaria’s integration of humor and major social issues struck a chord with the audience.

“She really took the hard issues and made them funny. She made people excited about what’s to come and all the progress we’ve made already,” Matt Sancillio ’17 said.

After the show, DeLaria was lauded for her method as much as her message. “She takes a message that can be complicated for many and condenses it into something that’s so comprehensive to a college audience. It’s a very hard group to reach to, but at the same time we hold a lot of sway,” Christine Carpenter ’17 said.

DeLaria’s incorporation of humor, comedy, and relative subjects was the perfect way to appeal to students.