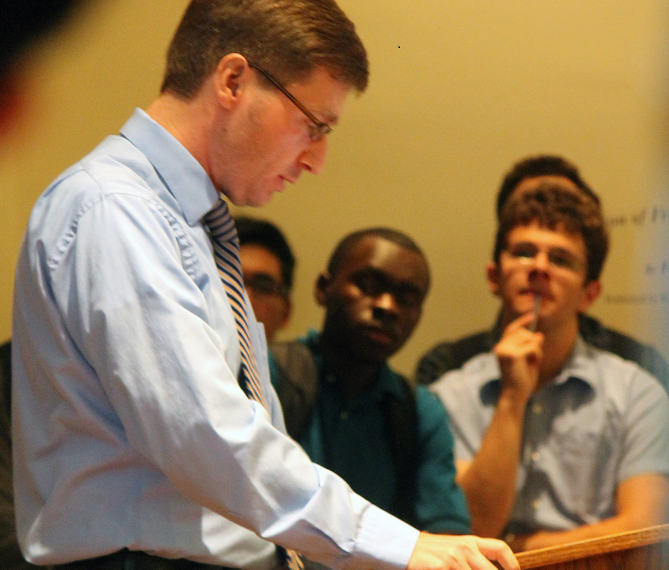 The faculty held a brown bag on the emergence of ISIS last Tuesday.

The International Students Association and Lafayette Amnesty International co-sponsored a brown bag last Tuesday where faculty members spoke about the emergence of ISIS in the Middle East.

Professors Il Hyun Cho, Youshaa Patel and Joel Shelton each spoke at the event, putting issues with ISIS in context with international affairs and providing a religious perspective and historical perspective.

Shelton began the talk by addressing the Islamic State’s roots. Shelton said ISIS first rose to prominence in reaction to US invasion in Iraq in 2003. At the peak of the Iraq insurgency, ISIS fighters occupied entire towns. The US troop surge, however, significantly weakened ISIS, eliminating approximately 80 percent of ISIS fighters. Recently, Shelton said, ISIS has gained military and economic power. ISIS has also turned to social media as a mechanism for influencing public opinion. While ISIS is a non-state actor, Shelton said, it exerts state-like power in terms of resources and aspires to be a state.

Professor Patel took a different approach to the topic and discussed the meaning behind ISIS’s flag and its imagery. The black flag of the Islamic state has become well-known over the past several months. Patel said ISIS’s black flag has come to represent their extremist religious views.

Shifting the discussion to the global response to ISIS, Professor Cho addressed the international response to the extremist organization. Cho discussed the responses of countries ranging from the United States, Turkey, Russia, and Israel. In particular, the United States has carried out airstrikes to target fighters across Syria. However, he said, the group continues to advance.

Cho, Patel, and Shelton all reiterated the serious threat that ISIS poses. The organization, with access to arms and resources, has presented a highly nuanced challenge to the US, its allies, and international organization.

“We are fighting an ideology rather than a fixed target,” Cho said.

“One of the things I found most interesting was Patel’s discussion of the flags,” Danielle Moore ‘17 said. “I had never thought about that being important, but it speaks volumes about their belief system.”