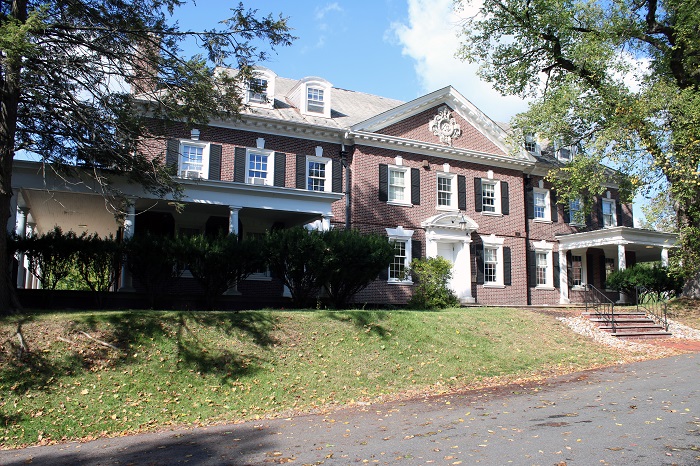 Chi Phi’s old house, Vallamont, is currently used as a residence hall by the college

By Matt Mitterhoff ‘16 and William Gordon ‘17

Chi Phi, a fraternity kicked off campus nine years ago for alcohol violations, sent an application to college officials Tuesday asking for formal recognition by the college.

Spokesman for Chi Phi’s Rho Chapter Stephen Bezer ‘15 and other interested members submitted the application to Vice President for Campus Life Annette Diorio for recognition of the organization by the college and to move back into Chi Phi’s old house, Vallamont.

The application listed ways the Chi Phi will add to campus life, such as creating a connected community and having a three-day “New Member Education” program rather than the normal eight-week pledging process new fraternity inductees currently undergo.

Bezer said the alumni are heavily involved in the process of Chi Phi applying to be recognized by the college.

As of right now, there is no formal process for a fraternity to apply for recognition on campus. But a recent committee organized by student government, the Recognition Working Group, is developing a proposal with recommendations for how student living groups, included new Greek organizations, should be acknowledged by the college.

“There’s a lot of worry that exists about the future of Greek Life at Lafayette,” Student Government President Connor Heinlein said, “but now that we’re developing a process, there is kind of a way forward for prospective organizations, or there will be.”

The college wants to create a process that ensures organizations are benefitting the campus community.

“We want to be sure that we have a process that allows student interest to be acknowledged and recognized in a formal way that we can add groups as there’s interest and as they help us advance the things that we’re trying to [do] as a community,” Diorio said.

The committee consists of six students and four administrators, including co-chairs Heinlein and Director of Residence Life Grace Reynolds.

The committee is currently researching how other colleges’ recognition processes work, and they plan to release their recommendations to the college by the end of the semester.

Chi Phi’s application requests that they be reinstated in January of 2015, but Heinlein said he is unsure how long it will take for a recognition process to be implemented by the college.

“The school collectively, I think, wants to move on this as soon as it can,” he said. “I can’t say exactly…how long it takes for implementation.”

The fraternity was kicked off in 2005 for a period of five years after being found in violation of college alcohol policy. After the period, the fraternity petitioned to return, but was turned down by the college. The college said they did not want to add new Greek organizations during a study being done by the Implementation and Assessment Group on Greek Life.

This prompted Chi Phi to file a lawsuit against the college, which the fraternity lost in 2012. The ruling was then upheld in a state appeals court in February.

Lafayette’s chapter of Chi Phi is currently recognized by the national organization and Chi Phi owns their old house on campus.

Mr. Messick, can I ask what your reasoning is for posting your comment? Are you supporting the expansion of Greek life, or just pointing out the fraternities that were kicked off?

Both! And the hypocrisy of Lafayette College.