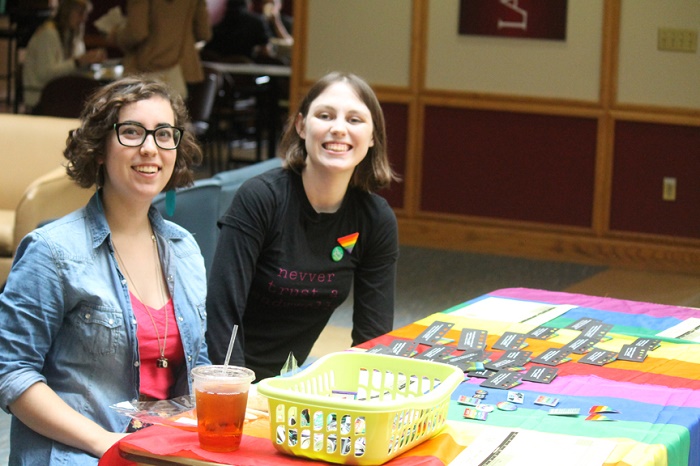 Students in Farinon celebrate the kick-off of LGBT History Month

Lafayette will hold events to recognize the LGBT community throughout October

The college is celebrating LGBT History Month with events throughout October.

The college will be celebrating LGBT History Month throughout this month and discussing current issues concerning the lesbian, gay, bisexual, and transgender communities.

Lafayette has organized several events to celebrate this month, starting with a kick-off which took place October 1. Other events include various talks, discussions and activities related to current LGBT events.

“I always have at least one, if not more than one specifically historic topic,” Director of Gender and Sexuality Program Gene Kelly said. “This year we are doing the history of pride and why is pride important or not important. At the end of the month, the Office of Religious and Spiritual Life is going to sponsor a panel discussion about legalizing same sex marriage in Pennsylvania.”

Some of this year’s events include a lecture on the history of pride and pride symbols in Kirby Hall and a screening of the movie “The New Black.”

“I think it’s important that we recognize that these sorts of observances are intended as a correction for what is largely missing from mainstream media as well as formal and informal education in the United States,” Dean of Intercultural Development John McKnight wrote in an email. His office helped with the organization of this month’s events.

One of the main events that will be occurring this month is the Keynote Lecture. This year’s Keynote speaker was chosen by the Lafayette Activities Forum, the Office of Student Leadership and Involvement, and the Office of Gender and Sexuality.

“We ended up settling on Lea DeLaria as the speaker because she has media recognition, because she is in Orange Is The New Black and people know her character and also because she has been a famous stand-up comedian since the 1980s,” Kelly said. “As a gender non-conforming woman, she is going to talk about her evolvement into being a TV show character but also the struggles she faces as a gender non-conforming lesbian in Hollywood.”

Every October, the United States celebrates LGBT History Month, according to LGBThistorymonth.com. This tradition was created by Rodney Wilson, a high school teacher from Missouri. It began when he told his class that had he been alive during the Holocaust, he would have been killed for identifying himself as a gay person. His idea for LGBT History Month was recognized by National Education Association in 1995.

October was chosen as LGBT History Month because of the major turning points in the struggle of the LGBT community that happened during this month, according to LGBThistorymonth.com. One of the major events was the March on Washington for Gay and Lesbian Rights, which took place on the October 11, 1979. National Coming Out Day, a day which celebrates individuals who identify themselves a gender and sexual minorities, is celebrated on the same day. It is a way to symbolize the anniversary of the March on Washington.