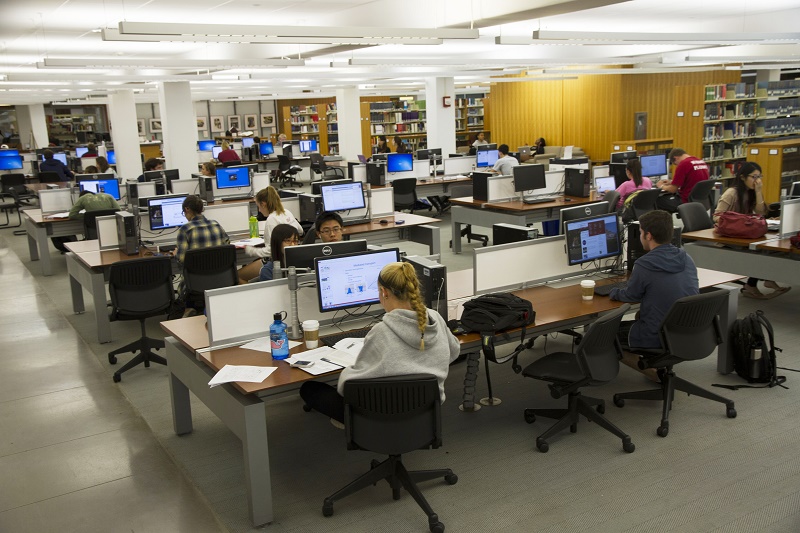 Skillman Library offers many different work environments for students do to their assignments.

College is using grant to expand programs in arts and technologies

Lafayette recently received a $700,000 educational grant to support the field of digital humanities at the college, allowing the college to expand programs that combine the arts and technologies.

Awarded by the Andrew W. Mellon Foundation, the grant will support technological training for work in the digital humanities, as well as the cultivation of projects and curricula involving the up-and-coming field.

The digital humanities are the use of technological tools in traditional humanities fields, Chair of the Digital Humanities Steering Committee Christopher Phillips said.

“It’s a way to combine computing tools with humanistic questions,” Phillips, an English professor, said. “It’s the kind of project where you couldn’t really do it without each of those. It’s humanities you couldn’t do without computing power. It’s a kind of computing you wouldn’t think to do if you weren’t asking these kinds of questions.”

One example of the current digital humanities projects at Lafayette is the work of anthropology professor Andrea Smith. She is using Geographical Information System technology to map data collected from oral histories of a now non-existent Easton neighborhood called Syrian Town, Phillips said.

“Nobody has ever really done anything with them…because you need to have a way to aggregate the data to do the kind of searching that a database structure would allow you to do. We’ve got an estimated 60,000 loan records,” Phillips said. “Without that [database], there is no point in us scholars sitting down with the ledgers and going through page by page to figure out how many times people took out Don Quixote for example.”

Associate Professor and Chair of Africana Studies Wendy Wilson-Falls, with the help of GIS and Imaging Librarian John Clark, is using the technology associated with digital humanities to create an interactive map that will visually depict data found for an upcoming book entitled Memories of Madagascar and Slavery in the Black Atlantic.

“We expect that the mapping of this information will allow new approaches to existing data and possibly new analysis as we get a visual representation of the locations of where slaves were settled,” Wilson-Falls wrote in an email.

According to a Lafayette press release from August 2013, “programs like EXCEL Scholars undergraduate research will be enhanced, allowing more students majoring in the humanities and social sciences to engage in high-level collaborations with faculty. Many EXCEL projects result in conference presentations and peer-reviewed journal publications.”

The digital humanities is one of President Byerly’s fields of interest, so expanding Lafayette’s involvement in that sector has been a focus since her introduction to the college in 2013.

“Some of my own scholarly research has been in [this] field,” Byerly said. “I found myself serving on panels and speaking at conferences on the question of digital scholarship and how we can foster it, support it and incorporate it into our understanding of scholarship as a whole. That has led to me to write a little bit on both digital humanities specifically and also technology in education more broadly.”

A committee for the digital humanities initiative created a grant proposal with Byerly in the spring of 2013 and the grant was awarded during the summer of 2013.

“The Andrew W. Mellon Foundation is a major funder of academic institutions,” Byerly said. “They have been very generous in supporting Liberal Arts colleges in particular. Lafayette has gotten a number of grants from them in the past.”

“A lot of big research universities have programs in digital humanities, not too many liberal arts colleges do,” Byerly said. “Having our own faculty take an important role in thinking about the place of this really emerging and important discipline in a liberal arts context I think gives Lafayette a very nice leadership position that I think we’re in a good place to undertake given that we are strong in technology and strong in humanities.”

Out of 70 institutions that are a part of the Digital Library Foundation, Lafayette is one of only three liberal arts members, according to the press release from the college.

With the increased emphasis on digital humanities, not only at Lafayette, but in the world of education as a whole, Byerly foresees the importance of the field.

“It’s interesting stuff. It’s one of those things that probably sounds like a buzz word but it’s something that is very much an up-and-coming field in academia,” Byerly said. “I think that probably the field in 20 years you may not call anything ‘digital humanities’. It’s just the humanities will have people who do digital work within it. But for now to be able to say specifically that there’s this interesting collision between humanistic thinking and the ways technology encourages us to think. It’s an interesting space to be in.”