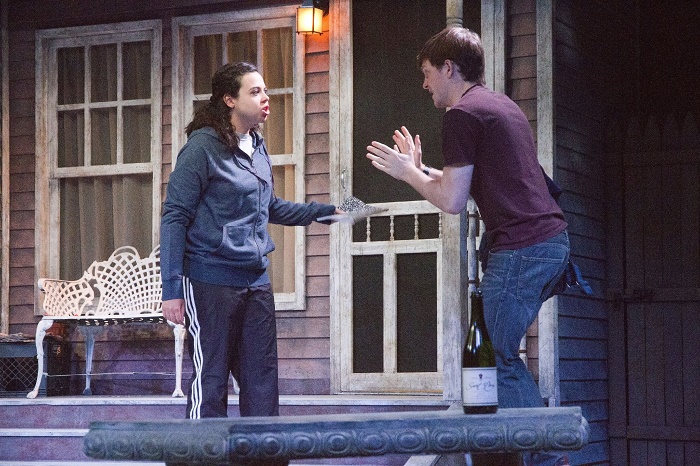 Jaclyn Moses gets an inside look at the production of “Proof,” A Lafayette College Theatre production will have its final show Saturday, October 4.

There are several cogs in the wheel in generating a successful theater production and David Auburn’s “Proof,” which began its run on Lafayette’s campus this past Wednesday, is no exception. Trudyann Buckley ’15 took on the role of directing the production as part of her senior thesis. She has been working closely with Theater Department Head Michael O’Neill to ensure the success of the production.

When Buckley began this project, she was overwhelmed by the options of countless plays. However, as soon as she read “Proof,” she fell in love.

“I love that it’s about people in academia because I can relate to it rather well—being someone from a very academic background,” Buckley said. “Also, it has very multidimensional characters, and I appreciate that a lot.”

Because the production is a part of Lafayette’s College Theater Department, Buckley has been working with professional guest designers for set and lighting. Set designer Will Lowry and lighting designer Jennifer Reiser have taught Buckley how to work with designers in a professional atmosphere. They both urge her to explain the purpose behind each of her decisions.

“A challenge has been figuring out where my boundaries are as a director,” Buckley said. “I don’t want to step on the toes of the actors or the designers, but I also want to make my vision clear, so I think the communication is also a little challenging.”

The play’s cast consists of only four characters. Grace Marchena ’15 is playing the lead role of Catherine, Emma Glubiak ’18 is playing Claire, Ethan Simmons ’18 is playing Hal, and Dr. Jeffrey Helm is playing Robert, Catherine’s father. Helm is a professor in Lafayette’s Mechanical Engineering Department, but has had previous acting experience. The crew includes Stage Manager Beth Miller ’15 and Assistant Stage Managers Ellen Corrini ’16 and Seiver Jorgensen ’18. While the cast and crew are small, the actors have been able to successfully work together in just five weeks of rehearsals.

“From a kid who has done theater for a very long time at just a moderate-sized public school, the amazing transition coming to college and then working under Trudy as a director,,” Simmons said. “It’s nice to actually join a show where everyone that is a part of it wants to be there, knows what they’re doing, and does it right.”

“Proof” has it’s final two shows on Friday, October 3 and Saturday, October 4. Each show begins at 8 p.m. and ends at 10:30 p.m. To purchase tickets, visit the ticket booth at Williams Center for the Arts.