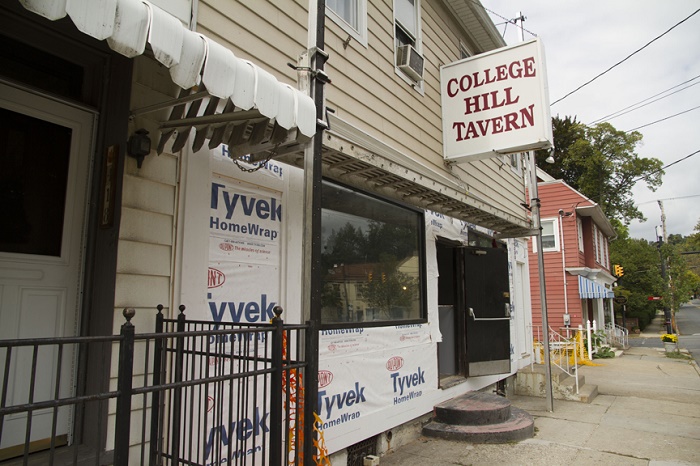 The College Hill Tavern will be reopening for business later this month after months of closure due to renovations.

The owners are optimistic that an October 17 debut date will be met to open the tavern to the public. Operating hours will be 12 p.m. to 2 a.m. daily.

Co-owners, and brothers, John and Maynard Melhem officially received their liquor license for the property this past week after a waiting period that lasted through the summer months.

The College Hill Tavern has previously served as a popular spot for students to grab a bite to eat or a drink after classes and to watch the latest game on TV or to meet up with friends on a weekend night out.

Many Lafayette students expressed their enthusiasm to try out the revamped College Hill Tavern.

“I have been waiting for the CHS to open since I got back on campus” Blair Gallante ’15 said. “I can’t wait to kick back and to enjoy a casual drink and good food with my friends.”

Currently, the tavern is under heavy construction. On the exterior of the building, two large windows have been added to either side of the main entrance. Internally, walls have been torn down to open up the space.

One of the goals of the project is to “create a flowing, open floor plan between the bar and the seating area to generate a more restaurant-like feel within the tavern,” according to John Melhem.

The bar has been moved from its previous location in the center of the space and has returned back to the left-hand side of the building, where it was originally placed during its early years of operation.

The right-hand side of the CHS will be for restaurant table seating as well as televisions to create a connected atmosphere within the space.

In addition to the physical space renovations, the menu will be changed at the CHT. The tavern has hired a new head chef who has former working experience at Pearly Baker’s in the center of Easton and the Steel Stacks in Bethlehem.

Additionally, the Melhems are looking to organize night time events that will be entertaining and inclusive for both the Lafayette and Easton community. Although the space may be too small to hold live bands, the owners are looking to hold karaoke nights and other themed events that would attract larger crowds.

John Melhem said that he wishes to appeal to Lafayette students through pricing that will be college friendly and affordable. He remarked that he is looking forward to integrating signature dishes, drinks specials, or events into the tavern based upon feedback from Lafayette students.