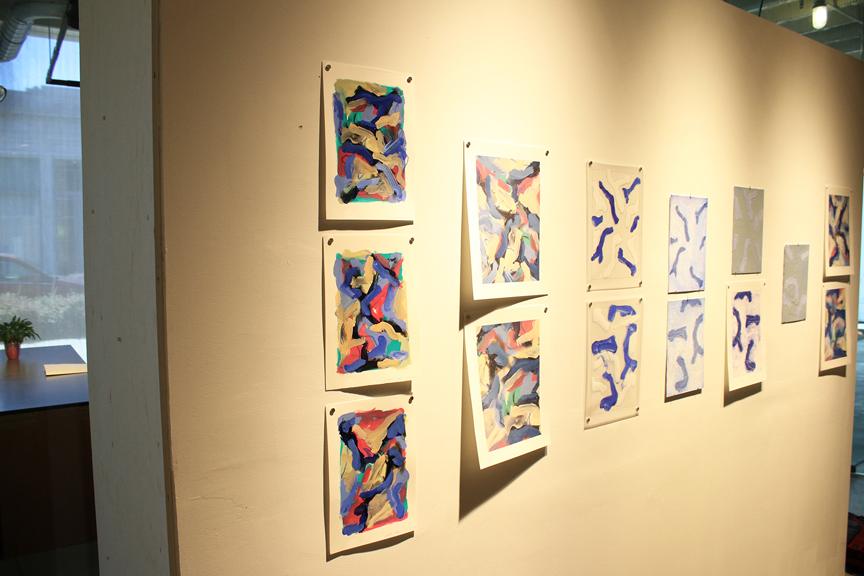 While Atsuhiko Musashi’s exhibit in the Williams Visual Arts Building titled “The Film of Painting,” showcases his superior work in the realm of experimental printmaking, the exhibit was severely lackluster. With the prior knowledge Musashi expertise in printmaking from the one-page print up program from the front desk of the gallery, the exhibit appeared promising.

Musashi mentions in the gallery’s Artist Statement: “both printed reproduction and digital media convert the textures of a painting into a dot pattern and pixels by extracting its physicality and materialness. A viewer may mentally compensate for the resulting lack of mass by creating imaginary textures.”

Musashi intends for his viewers to keep in mind digital media when interacting with his artwork. Modern digital technology represents how today’s society needs things faster and more efficiently. It is simple and easy, used to get services and products to consumers in the shortest amount of time. Although many see printmaking as a means of reproducing a painting, Musashi sees it also as a “film” of the painting because the physical textures have been removed.

Although Musashi brings up good theories in regards to printmaking, it proved difficult to tell how much of a difference it makes to the actual artwork in a viewer’s eyes. The paintings looked more clear-cut with less groves and obvious texture to their surfaces, however this is something the average onlooker would only notice while up-close or while touching.

The exhibit little impression of the artist’s motives. There are a few possible reasons for this. The artist may have aimed to offer a commentary on reproductions and not necessarily a statement, which may have contributed to its lack-luster effect. Or the curating was off. More likely, it is a combination of the two.

The overall message of the artist, might have been clearer, if there were a decal blurb on the wall of some background on Musashi or a more guided way to approach the pieces in the gallery. For example, there is a wall, where drafts and originals are hung, but once again, there was no title or explanation present.

A few pieces including “Seeds & Flowers,” “Ash Flower,” and “Silent Flower” had an incorporated some masterful techniques in printmaking. In these pieces, the artist scanned several of his original works, rotated, enlarged, or reduced them and then layered them. These pieces definitely contributed to the conversation of image reproduction while the other works seemed misplaced in the overall tone of the exhibit. For example, the pieces “Marks in Light” were meant to resemble parts of broken ice covering a pond’s water surface. Although these seemed misplaced, they were the most aesthetically pleasing in their pale blues, royal blues, and glittering whites.

Overall, it is clear that Musashi is a master in the art of printmaking and has a lot to contribute to the conversation of image reproduction. Much of the artists’ ideas were not translated in the exhibit because of a lack of curatorial guidance. The average gallery viewer would need a background in printmaking and the artist in order to understand the artist’s goals.