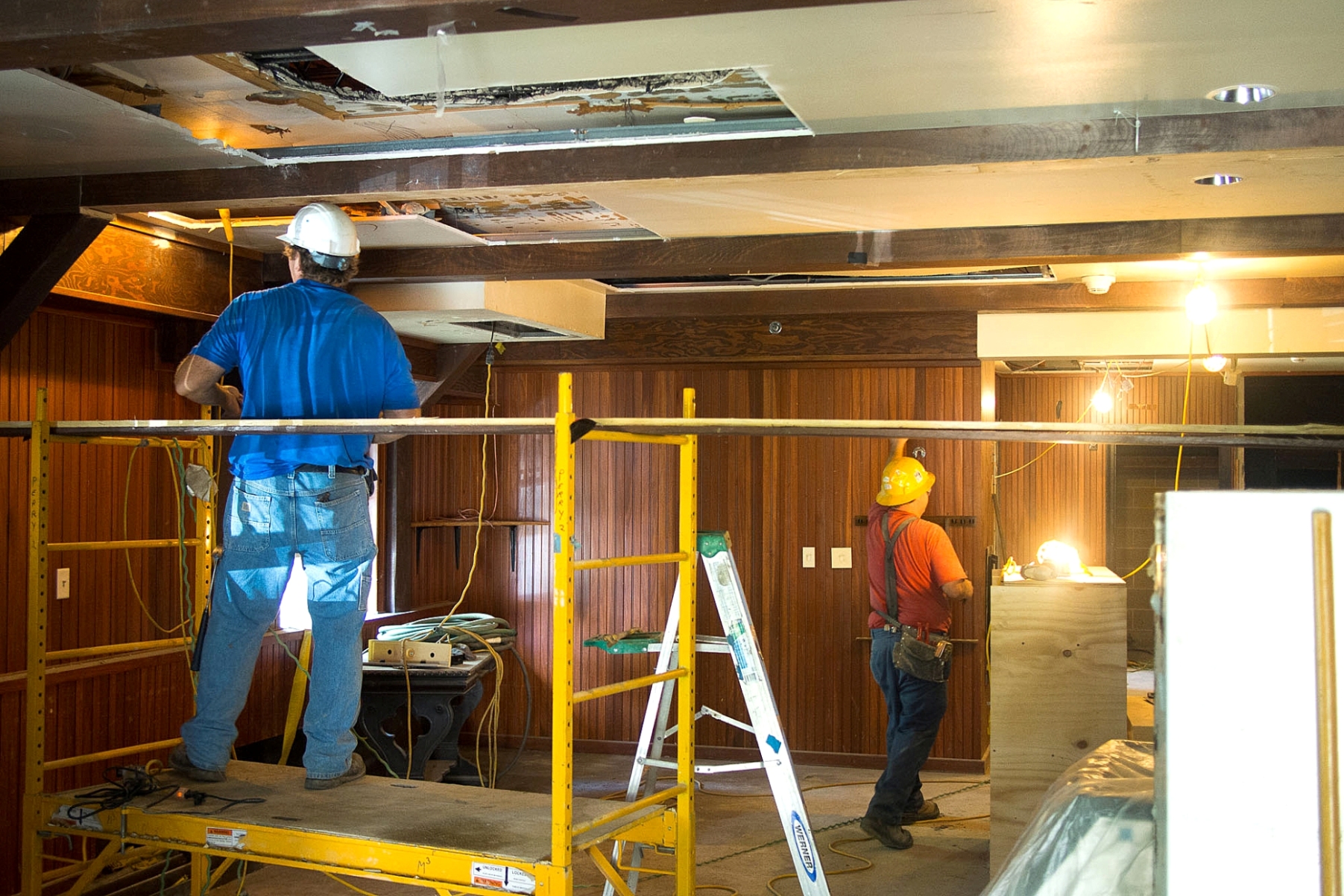 Workers doing construction on the DKE house, which was broken into over the summer.

Two Lafayette students and two other individuals were charged with burglary and similar criminal offenses after allegedly breaking into the construction site of the Delta Kappa Epsilon house on March Field over the summer.

All four individuals await a preliminary hearing on October 21 to determine whether there is enough evidence for a trial.

Associate Director of Public Safety Jim Meyer said he has dealt with similar cases in the past, but the final sentence, he said, is difficult to predict, especially because they are second degree felonies.

“They may not get a prison term, but the potential is there because of the grading,” Meyer said. “But it’s always there in a felony, even on a misdemeanor.”

Meyer said surveillance footage showed that several individuals were transferring items from inside the secured site to someone’s car between 3:39 and 5:12 am.

The car was identified as a Jeep Wrangler and found by video surveillance a day later on campus with the stolen tools which had Brown’s name printed, court records say.

Meyer oversaw this investigation and explained that detectives cross-referenced the records from the keyless access systems and from the surveillance systems to determine likely culprits. Flynn and Chugthai appeared in both records.

When Harnish returned to the Jeep, Public Safety approached and told him that they believed he was responsible for stealing the items the previous day, according to Meyer. Harnish complied and helped to return the stolen items.

When Public Safety confronted the individuals, they willingly admitted the events of the morning of July 12, according to court records.

After the first trespassing onto the construction site, Flynn did not go back, but Harnish, Chugthai, and Martin returned to the fraternity, when more property was stolen and freezers were damaged by sledgehammer.

“Most of all those tools that were mine were being used by people who work for us,” Brown said, emphasizing the initial and sizable hindrance the theft presented to his contracting company’s work.

“The approximate cost to remedy the damage is several thousand dollars,” Alumni President of the Rho Chapter of DKE Michael de Lisi wrote in an email.

However, Brown and de Lisi said the project can and will continue on schedule.

“Thanks to the successful investigation and quick recovery of the stolen equipment, this did not set the project back,” de Lisi wrote.

It was not clear what action the college is taking in reaction to these events. The lawyer associated with the case could not be reached.