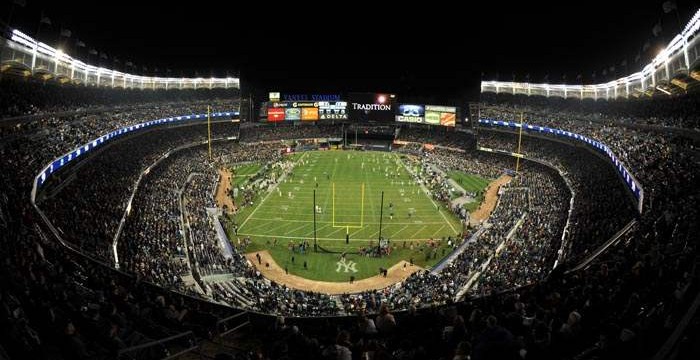 The rivarly that rivals them all

On warm, sunny days, Lafayette students are likely to be found lounging on the quad, the grassy expanse bounded by historical buildings such as Pardee Hall, Farinon Student Center, and the Colton Chapel. But the quad was not always the heart of campus, nor were those buildings as historical as Lafayette’s original student hub: March Field.

In fact, March Field wasn’t just a casual gathering place. It was also the site of the first official Lafayette-Lehigh football game along with many other contests, the results of which may be all but forgotten except in Skillman Library’s archives. With the 150th anniversary of that first Lafayette-Lehigh game to be played in less than three months, it seems only appropriate to look back at the place where it all began.

March Field is a patch of ground on the edge of school property surrounded by the Delta Kappa Epsilon and Phi Kappa Psi houses and Farber and Ramer Halls, overlooking Route 22 and a bend of winding Bushkill Creek. Until the late 1800s, it wasn’t the “level field known to later generations of Lafayette men, but a rocky area sloping sharply to the north and west,” according David Bishop Skillman, the Lafayette alum for whom the library is named, in his 1932 tome, The Biography of a College Being the History of the First Century of the Life of Lafayette College.

Then along came Lafayette professor Francis A. March, Jr., son of a prominent Lafayette linguistics professor, and, eventually, a one-term mayor of Easton. He not only recognized the need for an athletic field on campus, but was also determined to do something about it.

“March was given charge of the fund-raising effort for the new field,” Director for Special Collections and College Archives Diane Shaw said at the dedication of the campus’s Francis A. March, Jr. monument in 2007. “By the next year, there was enough money in hand to purchase a tract of land along Sullivan Road—some six or seven acres—to serve this purpose.”

From the beginning, March had the audiences of games in mind as much as the Lafayette athletes who played on the field.

“It is not the athlete on the field, not the eleven men on the football team, the nine men on the baseball diamond, or the clean-cut young racers who distinguish themselves on the track, that gain the most benefit from athletic contests in which they play so prominent a part,” March said in his book Athletics At Lafayette College, published in 1926. “It is the student on the bleachers who comes out day after day in the open air and God’s sunlight, with all meanness, all uncleanness, all trickery vanished from his heart, to cheer and admire the feats of strength and skill of his classmates on the athletic field.”

The first football game played on the field was against Lehigh on October 25, 1884, with a roster of eleven Lafayette stalwarts who played both offense and defense. By that time Lafayette had a relatively experienced football program, having begun playing neighboring schools like Princeton and the University of Pennsylvania a couple of years earlier. Lehigh was just starting out. Lafayette won the day by a dominating tally of 50-0.

Now, 149 meetings later, the two rivals will be facing off once again, but this time in a very different setting.

“We are super excited,” Ross Scheuerman ’16 said. “It’s a great opportunity for both schools. It’s hard not to think about that big of a game.”

With a record of 77-67-5 against the Mountain Hawks, Lafayette will attempt to add another victory, with Drew Reed ’17 behind center. Reed set a single season school completion record last year with a 73 percent completion rate, as well as arming a 17 to 5 touchdown to interception ratio.

On the defensive side of the ball, new coaches Art Link and Mike Saint Germain have brought some added energy and knowledge to a defense that was ranked 2nd in the Patriot League, following Bucknell.

“All of the changes to the staff came on the defensive side of the ball and I speak for everyone when I say how excited we are to have them,” Senior Captain James Coscia said. “They bring a lot of energy to practice and they really do love their jobs which gets us fired up to go out and work every day.”

Today, the games played on March Field are just memories, and Yankee Stadium is the future. But if you sit there on a crisp fall day and close your eyes, you can imagine the cheers of the Lafayette faithful as they and Francis A. March, Jr. enjoy the open air and the divine sunlight, and urge their team on to victory.