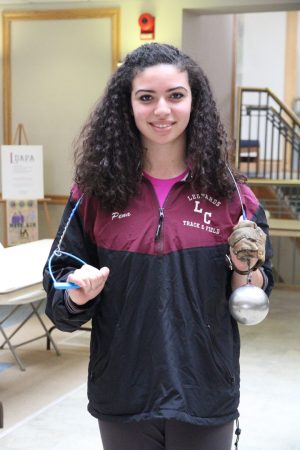 This season has been a continuation of the enormous success that Rachel Pena ‘14 has enjoyed on the track team over the past four years. Pena placed first in back-to-back meets this season: Lafayette vs. Lehigh and the Bison Open, in both the 20-pound weight and the shot put. She also placed eighth at the New Balance Invitational. Pena currently ranks second in school history in the hammer throw, second in the 20-pound weight, fourth in the outdoor shot put, and fifth in the indoor shot put.

How did you get involved in track and field and how has influenced you the most?

My mom did track in college. She was All American for Division III in discus. Ever since I was little, she pushed me towards doing track. I wasn’t sure how that would go, but I ended up doing it in seventh grade and I loved it; I tried every event and my favorites were high jump, shot put, and the short sprints. When I got recruited by Lafayette, my coach, Michele Curcio told me about the hammer throw; I had never heard of it before and I didn’t even know what it was

What athlete would you compare yourself to most in terms of throwing style?

Yipsi Moreno; she’s from Cuba and a hammer thrower. Me and her have the exact same body type, which gives me a lot of confidence because she’s an Olympian thrower and to see her succeed, it shows me that I can get to that level some day if I work hard enough for it. She’s definitely someone that I look up to.

What, if any, are your meet-day rituals?

I always start the morning off by listening to really calm music. People usually want to get pumped up and listen to fast music, but I like the really slow, really calm music. I always do a contrast shower either the day of or the night before. I always eat an hour before my meet; normally I’m not hungry so I force myself to eat something whether it’s a granola bar or a sandwich. And I drink a lot of blue Powerade.

What is the best advice that you would give to younger athletes in your sport?

Everything you do counts. I feel like in practice, coaches can pretty much control what you do, like how many reps you do, or how you lift, or how you throw. Outside of practice, it depends what you do on weekends, how much sleep you’re getting, how you’re staying on top of school work so your not pulling all-nighters, the food you put in your body – all that counts more than you know.

What has been your favorite memory so far?

Definitely winning the Patriot League Championship my sophomore year has been one of my favorite memories. That meet, I went in as the top seed, so I was really nervous and I wasn’t sure how it was going to go. I was a sophomore… I mean seniors usually win that event. I remember my teammates beforehand; we were just in the gym getting ready to go warm up, having fun, taking pictures and it all helped me calm down when I got to the meet. After I won it was so surreal; it gave me something to chase after for the next few years and I’ll be chasing for it this year.

What are your future goals in the sport?

I’m going to keep competing. I have a dual citizenship with Puerto Rico, so I’ll be competing with them and traveling to different meets. I’m really excited about the NACACs, which is for athletes under 23 across the U.S., Central America, and the Caribbean. It’s a huge meet because it’s the top two in every country for each event. I will be competing for the rest of the year and hopefully some day I can get a shot at the Olympic trials for Brazil.

How have you progressed from your freshman year to now?

I came into college not knowing what [hammer throw] was. I went from starting at level zero to being a contender in the eastern region of the United States. In nationals I was 40th for the U.S., from Olympians to college students. It has been a huge jump and that’s all because my coach is an expert at hammer and she has really helped me get to the next step. When I watch my video now from freshman year it looks completely different.

Favorite Movie: Back To The Future

Favorite Time of the Year: December

If you could go back to one event in history: The Renaissance

If you could meet one person: Jesus