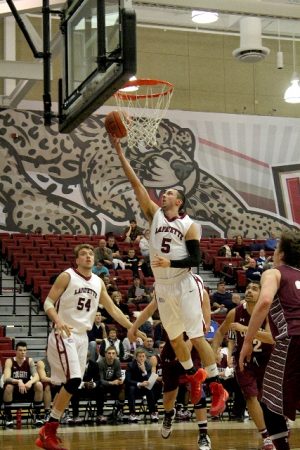 His hot hand may be the ticket for the Lafayette men’s basketball team to make a late season push.

Over the last two games, junior guard Joey Ptasinski shot 11-12 (.917 shooting percentage) from the 3-point line. Last Saturday, the Leopards routed the Midshipmen of Navy 72-54. Over a 12-minute stretch in the second half, the Leopards went on a 25-2 run, led by Ptasinski’s sharpshooting. Over that stretch, he shot 6-6 from behind the arc. Ptasinski led the Leopards with 22 points.

“It was mostly my teammates’ idea,” Ptasinski said. “They told me that they were going to set good screens and find me when I was open. I was just able to get open and guys like Nick were able to find me. I made my first couple shots early on and it just got my confidence going for the rest of the game.”

On January 27 against Colgate, Ptasinski put on a similar show, shooting 5-6 from the 3-point line and finishing with 21 points.

“I was able to find open spots early on in the game,” Ptasinski said. “Just like against Navy, I had my guys really looking for me. Once you hit those first couple shots early it builds your confidence and you feel like everything is going in.”

This confidence comes after Ptasinski struggled over the first few games this season, shooting 4-10 against Robert Morris, 3-11 against NJIT, and 3-9 against Penn. Ptasinski said that he hasn’t changed his shot in anyway, but that he has only gained the necessary confidence to perform.

“The mental part of basketball is a big one,” Ptasinski said.

Ptasinski has brought his jump shot with him from high school, where he led his team to consecutive Colorado Class 5A titles in 2009 and 2010. In 2009, Ptasinski was an All-State selection as well as an Academic All-State selection. In 2010 he earned Colorado State MVP honors, where he averaged 19 points per game, along with four assists, three rebounds and three steals.

This season has been Ptasinski’s most productive at the college level; he’s averaging 11.8 points per game, while shooting 49 percent from the field and 46 percent from beyond the arc. His field goal percentage mark puts him at 13th in the Patriot League, while his 3-point percentage puts him at third. Ptasinski’s 3-point shooting percentage is 21st in the country for players with at least 100 attempts.

Even though the Leopards aren’t where they want to be at this point in the season, they are starting to play better coming down the stretch. The team dropped 11 straight over the months of December and January. Ptasinski admits that even though each loss hurts, they turn each loss into a learning experience.

“We don’t forget about the losses,” Ptasinski said. “We try to turn them into learning experiences. We look at the negative things and touch on the positive things. When we finally win a game, we try to build on the things that we have been doing right.”

Ptasinski’s precision on the court matches his will to succeed off of it. Being recently selected to the Academic All-District II team, No. 5 adds another academic accolade to his trophy case. The award recognizes the six top student-athletes in the district for their effort on and off the court. Ptasinski is a Biology major with a cumulative GPA of 3.49.

The sharp shooter and teammate senior Seth Hinrichs along with Loyola Maryland’s Franz Rassman were the only three Patriot League players awarded this honor.