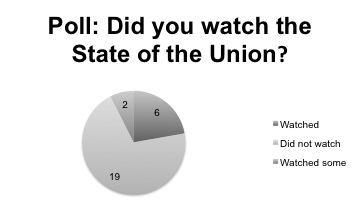 At a school that prides its students on being engaged and interested in important current events, it is unfortunate that so many of the students who responded to last week’s “On the Spot” question, “What did you think of the State of the Union address?” said that they did not watch the speech.

Some of the reasons for not watching were reasonable, with more than one responder saying that he or she had other activities on campus going on during that time.

One responder said that she did not watch the President’s speech because she was not able to find a television to watch it on. Not only was the speech broadcast live on thirteen different television networks, it was also streamed at many locations online, including YouTube, and different news sources such as ABCNews.com and Politico.com. Surely, there was a way for a student to watch the speech on Tuesday night.

Lafayette is not alone in this absence of attention. This year’s speech was the least watched State of the Union in the past 21 years, clocking in 33.3 million viewers, according to Nielsen ratings.

The answers to last week’s question prompted The Lafayette to take a poll of students, asking them whether or not they had watched the speech. Out of 27 students polled, 19 said they did not watch the State of the Union.

When asked about the speech, students polled had similar responses to those who answered the On the Spot question. One student, Michael Coates ‘15, said that he did not know the speech was on. Another student, Gavin Steudner ‘16, said that he had too much work to do and that professors “should make it a priority” for their students to watch.

It is upsetting to see that so many students did not watch the speech, especially when Obama touched on issues central to a college student’s lifestyle, particularly the affordability of higher education. Hopefully, if this question is asked next year, students will answer that they at least somewhat paid attention to what the speech was about.

Michael A. Kowaleski ‘14 contributed reporting to this article.