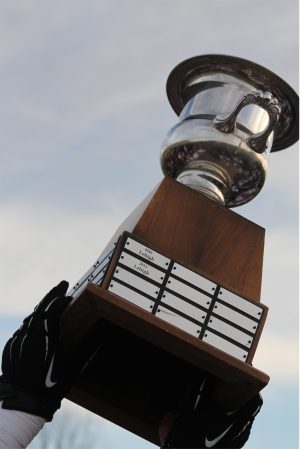 It all seemed fitting for the Lafayette faithful at Goodman Stadium this afternoon.

Five long years have ticked by since Lafayette last defeated Lehigh. It was almost commonplace each season – Lafayette fans flocked home while Lehigh’s remained and celebrated yet another victory in college football’s most played rivalry.

But this year, on a crisp autumn day in Bethlehem, Pa., it was Lafayette. It was the Lafayette faithful that stayed and watched herds of people donned in brown and white flee their home stadium for the parking lot.

And how sweet a sight it was.

Lafayette trounced its archrivals from the very beginning en route to a 50-28 victory. The Leopards secured their first outright league championship since 1994 and clinched an FCS playoff berth.

Fans stormed the field as the final seconds faded away. Players joined them. Coaches hugged. Head coach Frank Tavani held the trophy high in the air as his players roared.

The journey, from the 1-5 start to winners of four of its next five, will go down in history. Coaches and players alike spoke often of the resolve and determination this team possessed. Their goal was not a winning record, but a Patriot League Championship, they said.

That was accomplished today. Their words were backed up with a memorable performance.

Running back Ross Scheuerman totaled 106 yards on 21 carries along with two touchdowns.

Ross and Scheuerman became the first 1000-yard receiver and rusher for the Leopards in the same season.

The score 36-28 with 8:49 remaining, Reed found Dixon on a short screen pass and it was all Dixon from there. Dixon cut inside, made multiple defenders miss and sprinted into the end zone for a 68 yard touchdown that provided much needed relief to Tavani, players and fans alike.

Exactly one minute later, defensive lineman James Coscia recovered a fumble and returned it 40 yards for another touchdown. It was the dagger.

From there, it was not a matter of if, but when. Lafayette fans inched towards the small staircase leading onto the field. Players would go slap hands and hug members of the crowd.

When the scoreboard finally read zero, it all came to fruition. Celebration ensued.

View all posts by Michael Kelley →