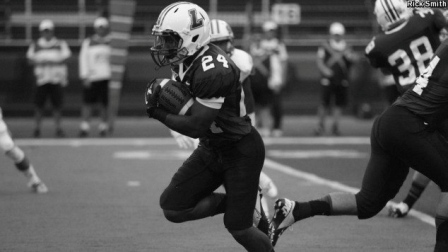 Matt Smalley stood in his own end zone waiting for Sacred Heart to kick off. It was the opening game and Lafayette football 2013 was underway. Sailing through the early fall air, the football fell into his black-and-white Nike gloves and the rest was simple: run.

Weaving through blocks from his teammates, the former high school track star gained speed as he warded off Pioneer defenders, bursting into the open field for a 98-yard touchdown.

“It’s crazy because the first game of my high school football career, I also took a kick return back [for a touchdown],” Smalley said.

That 98-yard return broke the school record for longest return and won him the Patriot League Special Teams Player of the Week award.

Smalley starred at running back for Father Judge High School in Philadelphia, totaling 984 yards and 21 touchdowns. Now, at the Division I FCS level, his role has changed to defensive back and special teams.

“At this level you really only play one side of the ball,” Smalley said. “They put me on kick return because they knew I’ve played running back before and I have returned kick returns before, but now I’m just strictly a defensive back.”

Smalley has put up impressive numbers this season at cornerback, recording 23 tackles, a blocked punt and a sack in just three games. He has quickly emerged as a key to success for Lafayette.

“He is one of the young guys that I’m excited about, seeing him grow as a football player,” special teams coordinator and defensive backs coach Doug McFadden said. “He’s a guy with speed and athletic ability. I think he has the whole package – we just need to get it out of him especially at defensive back.”

“I can sit on short routes and I still have the recovery speed to play long routes, so I think my speed is the biggest part of my game,” Smalley said.

Though he has risen to the occasion this season, Smalley has his sights set on achieving All-American status for two years.

His goals are not just individual ones.

“You have to take steps. First goal is to win a Patriot League title,” Smalley said. “But after that, I want to win a National Championship.”

The first step toward that goal begins tomorrow against Bucknell at home in Lafayette’s Patriot League opener. With a large Homecoming crowd expected in attendance, another electrifying kick return from Smalley would liven up Fisher Stadium.

View all posts by Michael Morgan →