Photo by Nicole Maselli ‘14|The Lafayette 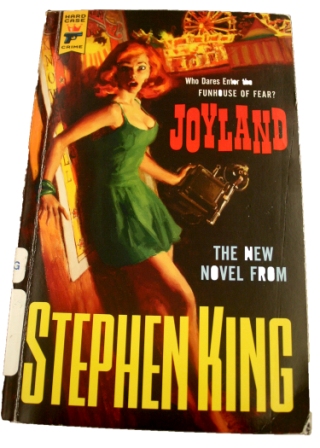 Joyland is a fun new novel by Stephen King, published as a small paperback in the cool retro style of the great pulp crime classics of the fifties and sixties by the publisher Hard Case Crime. King writes Joyland to be a quick read, a trait quite rare in his repertoire.

College student Devin Jones, recovering from a bad breakup, decides to take a semester off and work full-time at Joyland, an amusement park in Heaven Beach, N.C., where he has just completed a summer’s employment. Jones is increasingly fascinated by the unsolved murder of young Linda Grey that occurred several years earlier. Grey had been killed on the only “dark ride” in the park, the Horror House, which is said to be haunted by Grey’s ghost.

Jones pieces Linda’s violent death together from nuggets of fact, rumor, and conjecture offered by his colorful coworkers and equally intriguing landlady. As he edges closer to the truth, Jones becomes friends with a young disabled boy and his mother on his beach walks to and from Joyland. The boy helps him uncover for about the murder, since he has psychic flashes. Though these images often perplex and confuse him, the three attempt to understand the nature of his ability. Though this medium, it becomes apparent that Grey’s murderer is also an employee of Joyland, preparing to kill again to protect his secret. It is up to the three to solve the crime.

King does an excellent job developing his characters. He paints a believable portrait of a lovelorn, depressed college student who signs up for what becomes much more than a summer job. Evoking the sights, sounds and daily dramas of a small-town amusement park, King revels in the language of the carnies and deftly draws the reader into their world. Joyland is a balanced blend of crime and mystery plot, with a splash of classic Stephen King haunting. This book is a page-turning suspense; strap in, click down the safety bar, and go for a ride in Joyland.

C. J. Trent works as the Math dept. secretary. Her favorite ride is the carousel.