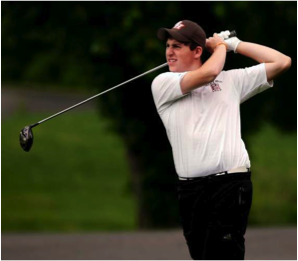 “I don’t feel like the ‘small’ player on the team because I’m a freshmen,” Jared Mactas said. “I don’t look at them as freshmen, sophomores, juniors, or seniors. I look at them as my teammates.”

Mactas should not feel “small” playing on Lafayette’s golf team. As a freshman, Mactas has burst onto the scene during the first few weeks of the season, even earning himself the rare captainship.

In his first collegiate tournament, Mactas played lights out, beating the 75-man field at the Colgate Invitational. He had rounds of 74-70-71 (one under par) at Seven Oaks Country Club. In his second tournament (Bucknell Invitational), Mactas led the way for Lafayette, tying for 13th out of 55 players. He shot rounds of 74-78-474 at Bucknell Golf Club.

The freshman phenom still feels his performance could be improved.

“Seven Oaks [at Colgate] fit my game well,” Mactas said. “I’m still not happy with the way I played that weekend [at Bucknell].

Mactas is familiar with the highs and lows of golf. He’s been playing golf since he was 13. Mactas played for four years in high school and participated in various American Junior Golf Association tournaments.

“I’ve belonged to a country club my entire life,” Mactas said. “At 13 I wanted to be the best. Now I have such a passion for the game.”

“In high school, matches are nine holes and all you can do to warm up is putt,” he said. “College is all tournaments and you can go to the range to warm up. High school wasn’t rigorous, so I could play every day. You have to manage your time better in college. I haven’t seen a golf course in 5 days.”

Mactas says that the team atmosphere is different too. “In college, we all have different schedules, so you don’t always see everyone at practice. In high school, everyone would be at practice. We try to have team bonding once a week. It’s a great group of guys.”

“Most freshmen don’t play their first year,” he said. “I’m fortunate to be on a team that accepts me for who I am and how I play.”

One thing that Mactas has gained over the years is confidence. Mactas has nothing but high hopes for the future.

“I know I won’t be the most talented player each week, but I’ll work the hardest and play the smartest. Even if I don’t put up the best score, and as long as I attack the course, I’ll be happy. My goal is to win a Patriot League Championship. There’s nothing like the team atmosphere after a win. I always get goose bumps.”