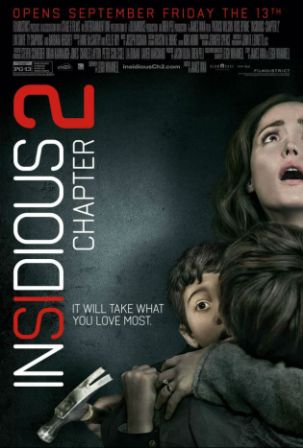 Almost as penance for the Saw franchise, Wan began making films that are actually, well, scary instead of sickening. For my money, Insidious and The Conjuring are two of the best major-studio horror movies of recent memory. Wan is excellent at building a creeping sense of dread that gets us at our most unabashedly primal. His plots are as thin as his characters are flat, but at least the stories have just enough meat to draw us in.

While I don’t think Insidious: Chapter 2 reaches the same level of get-under-your-skin fright as Wan’s previous efforts, I do believe that when Wan and co-writer Leigh Whannel want to leave us on the edge of our seat, they’re aces at it. Ignore the plot leaps, obvious implausibility, and the occasional logical inconsistencies, and Insidious 2 will give you goose bumps in all the way it intends to.

The film picks up where its prequel, Insidious, left offm which ended on a doozy of a cliffhanger. Josh Lambert (Patrick Wilson), his wife Renai (Rose Byrne), and their sons Dalton (Ty Simpkins) and Foster (Andrew Astor) move into grandmother Lorraine’s (Barbara Hershey) house to try to get away from the spirits that had made their life a nightmare.

Of course, they don’t escape. The film builds upon a slowly growing mythology providing us with answers as to who the spirits are and why they have been making the Lambert’s lives miserable. The film loses some narrative steam in its second half as it tries to provide these answers; they never feel as necessary or interesting as Wan and Whannel try to make them out to be. Though one answer is so absolutely insane and weird that it’s almost worth it just for that.

The best part of Insidious 2 is the designs of the things that go bump in the night. They are lovingly created combinations of special effects, make-up, and costuming with gothic and grotesque touches, yet are oddly familiar at the same time.

I don’t want to oversell Insidious 2. It isn’t so much a good movie as it is a not half-bad horror movie. You will likely go in, get a few good scares and forget the details of the movie a few hours later. You won’t rave about it to your friends and family. And you may even complain about it, as it is not without its problems (it becomes unintentionally rather goofy at times). For those looking for horror thrills, it will likely be enough. For everyone else, you might want to pass.

View all posts by Patrick Larkin →